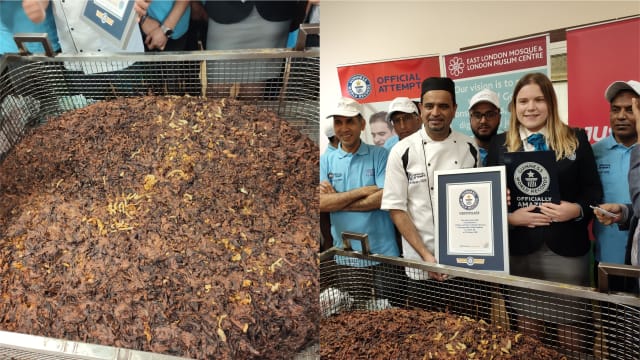 The record for the world’s largest onion bhaji was broken in east London on Tuesday by a whopping 73.4 kilograms (162 pounds).

The record effort was led by chef Oli Khan, who created a 175.6 kilogram (387 pounds) monster onion bhaji with the help of his team.

The bhaji took eight hours and 500 litres of oil to make, while the event, in partnership with Just Eat, was held at the East London Mosque and London Muslim Centre.

Other Guinness world records broken at The East London Mosque and London Muslim Centre include the largest samosa in the world.

“This wouldn’t have been possible without my team, who are all present with me today to share in this amazing victory,” said Mr Khan.

“This isn’t just a win for us, it’s a win for our nation Great Britain, which we are proud to represent!”