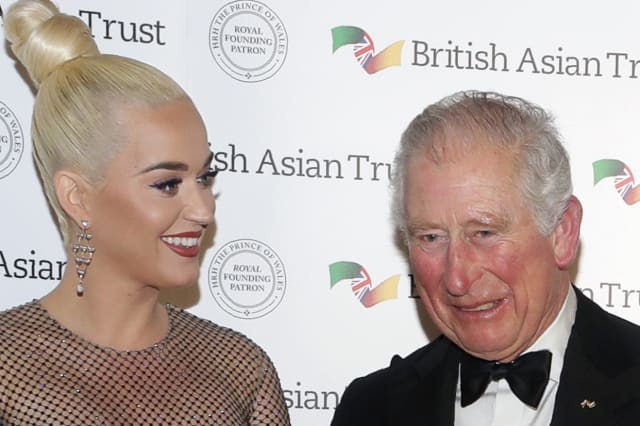 The Prince of Wales has asked pop princess Katy Perry to sing to his plants as he described meeting the US star as a "wonderful birthday present".

Perry greeted Charles with a "Hello, again" before he named her as an ambassador of his British Asian Trust in a major drive against child-trafficking.

The Roar and Firework singer joined Charles and the Duchess of Cornwall at a black tie reception and dinner at Banqueting House in London on Tuesday night.

In a speech, Perry said: "I'm excited to be here because I'm a big fan of his royal highness and all the work that he has done and is continuing to do, especially in India for children.

"In my own personal experience, he has an incredibly kind soul.

"So kind, that yes, sometimes he talks to his plants.

"And he asked me if I could sing to his plants.

Perry introduced Charles to the stage, and the prince said: "I'm enormously grateful to Katy Perry for such a kind introduction, which she told me just now that she wanted to make it slightly more spicy, but I think she resisted the temptation.

"But I must say it was a great pleasure to have met her in Mumbai last November at a gathering for British Asian Trust council members on the day before my birthday.

"Meeting her turned out to be a wonderful birthday present.

"Given Katy's long-standing commitment to charitable causes around the world, I'm delighted to be announcing that she has most generously agreed to become an ambassador for the British Asian Trust's children's protection fund for India."

Before their speeches, Charles and Perry laughed together as they chatted, with the singer said to have remarked to him that she had heard he talked to his plants.

Charles is said to have replied to her: "I would prefer it if you sang to them."

The British Asian Trust (BAT), along with billionaire Sir Chris Hohn and the Children's Investment Fund Foundation (CIFF), is to develop the largest anti-trafficking fund ever seen in South Asia.

There are believed to be 5.8 million children working in forced labour in India, with tens of thousands thought to be in hazardous workshops in Jaipur alone, producing goods including bangles, embroidery and other products, with many forced to work for up to 15 hours a day.

Perry, who first met Charles in Mumbai in November when she attended a BAT meeting to learn more about its work, said: "I was impressed by their strong plan – from on-ground initiatives to fundraising – that will aim to cut child-trafficking in half."

The star, who is also a Unicef Goodwill Ambassador, said she hoped she could "help shine my light on the work that the British Asian Trust will be doing in South Asia, and to be a part of finding solutions to child-trafficking".

Perry added: "Children are vulnerable and innocent and have to be protected."

Indian philanthropist Natasha Poonawalla has made a multimillion-pound pledge to the fund, while CIFF will match everything raised up to £25 million.

Thank you to @NPoonawalla and @adarpoonawalla for your generous commitment towards #BritishAsianTrust's Children's Protection Fund for #India. Together we will work to protect children from trafficking and give them safer futures. pic.twitter.com/ywUdJUC98R

BAT has been working with business, government and communities to remove child labour from supply chains and encourage child labour-free products in markets as part of the Child Labour Free Jaipur Initiative.

Charles founded the organisation with British Asian business leaders in 2007 to tackle widespread poverty, inequality and injustice in south Asia.

Richard Hawkes, chief executive of BAT, spoke to reporters about Perry and said: "She's such a massive global superstar and having her associated with the organisation in any way is absolutely brilliant for us because it definitely attracts attention, it gets people more aware of our work and aware of the anti-trafficking work that we do.

"So yes, without question it's going to raise our profile and get more people interested in what we do."