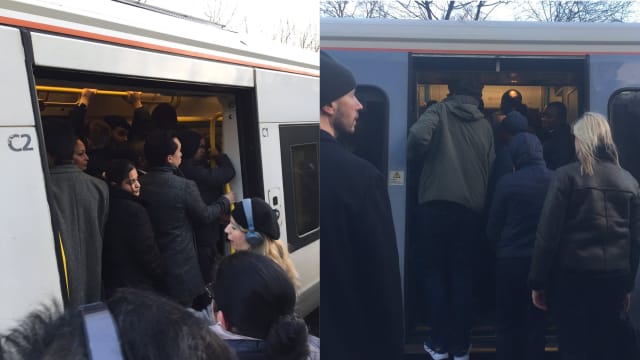 Commuters into London faced delays and overcrowding after a cracked rail saw trains into Waterloo East and Charing Cross suspended.

Multiple travellers posted images of busy platforms and people struggling to fit into overcrowded carriages as a result of the delays, with one passenger branding the problems a “national disgrace”.

Freelance designer Ellie, 39, asked: “Wondering how such a big crack in the line could suddenly appear @networkrail. Surely you work on preventing these sorts of things to appear?

“It shouldn’t be THIS hard to get to work. Network Rail and Southeastern trains are unfit for service.”

She told the PA news agency: “They’ve stopped about 70% of trains into London Bridge and Charing Cross. This, on top of Southeastern incompetence, leaves thousands of people not able to get to work.

“Southeastern trains are delayed every day. I honestly haven’t caught a train on time since October. As a daily freelancer, it makes my life very stressful.”

Network Rail posted a Twitter thread explaining Southeastern and Thameslink services would be disrupted due to a cracked rail near New Cross.

The operator explained: “We’re working on a plan to run trains around the problem but it’s not a normal rail, so it’s not an easy fix…

“One track crosses over another… we have to cut it out and replace it with a new part.”

Twitter user Nick Cook responded to the company with a picture of large crowds on a platform, saying: “@Se_Railway this what we’re confronted with. National disgrace.”

Further confusion was created for some passengers by the Network Rail app, which appeared to show trains in service that had been cancelled.

“Why does your app still show trains that according to the board on the platform aren’t even running today @Se_Railway,” asked @DrSabineMN.

“Check before you travel… bit of a joke!”

Southeastern said that trains unable to get to Charing Cross and Waterloo East would be diverted to London Victoria or London Cannon Street.

Thameslink services are also affected between Bedford, Luton and Rainham.