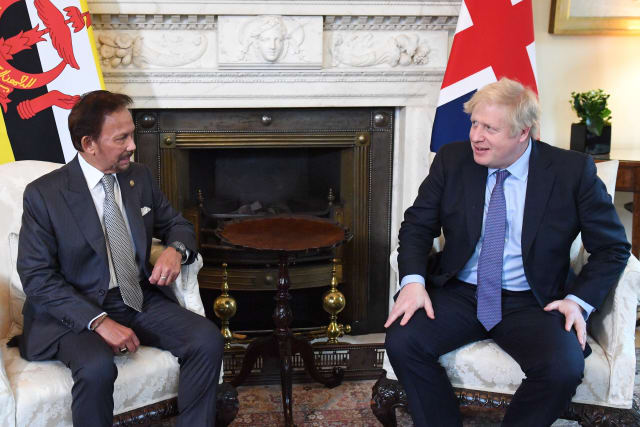 Boris Johnson has raised concerns about Brunei’s implementation of Sharia law in a meeting with the country’s sultan.

The oil rich state, headed by Sultan Hassanal Bolkiah, was at the centre of controversy last year when it announced penal code changes to introduce the death penalty by stoning for gay sex between men and adultery.

After an international backlash, including condemnation from celebrities like George Clooney and Sir Elton John, the sultan said that the death penalty would not be enforced.

However, strict anti-gay laws remain in place in the country.

In an apparent reference to the controversy, a Downing Street spokesperson said: “The Prime Minister raised concerns around the implementation of Brunei’s Sharia Penal Code with the Sultan, stressing that it is vital the country upholds the human rights of all its citizens in accordance with international law.”

The two leaders also discussed the COP26 climate change conference to be held in the UK later this year and security issues during the talks at Number 10.

A Downing Street spokesperson said: “The Prime Minister welcomed his majesty the Sultan of Brunei to Downing Street to renew a long-standing defence agreement and hold bilateral talks.

“The leaders agreed on the importance of the close security relationship between the two countries embodied by the 750 UK personnel stationed in Brunei under the terms of the Garrison Agreement.

“The Prime Minister reaffirmed the UK’s commitment to a secure and prosperous South East Asia.

“The leaders discussed the UK’s upcoming chairmanship of COP26, with the Prime Minister underlining the importance of diversifying energy sources away from fossil fuels.

“They looked forward to Brunei’s chairmanship of ASEAN and expressed a desire to deepen economic ties between the UK and the region.”