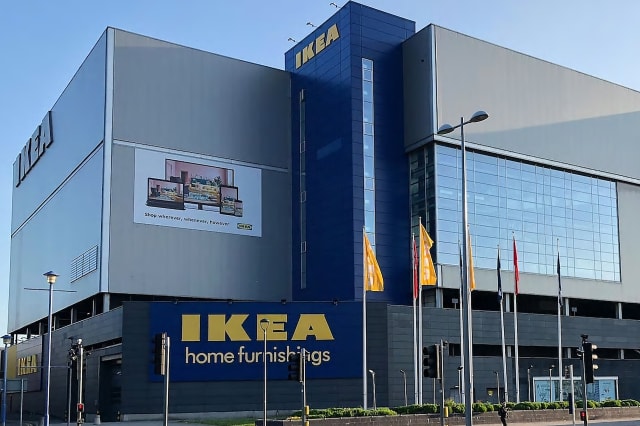 Ikea has confirmed plans to shut one of its large UK stores for the first time in its 33-year history in the country.

The company said it will close the doors of its £35 million Coventry branch, which opened at Christmas in 2007, with 352 workers expected to lose their jobs.

The Swedish furniture and home improvement giant added the site in the city centre was too expensive to keep operating and had lost customers to retail parks and online shopping.

In a statement, Ikea said: "The store was built over seven levels, which resulted in a significant impact on the operating costs of the store and the shopping experience for customers.

"In addition, the changing behaviour of customers in the area who prefer to shop in retail parks and online has resulted in visitor numbers being substantially lower than expected and continuing to decrease over time.

"These factors have led to the store making consistent losses."

The company said it tried a number of initiatives to keep the store open but "these have not resolved the fundamental challenges connected to the location and the format of the store".

An attempt by Ikea to downsize or redevelop the site was "not a realistic option".

The retailer first entered the UK in 1987, opening a site in Wembley, north London.

It now has 22 stores and is looking at rolling out more city centre locations – but far smaller than the Coventry site.

The firm will start a consultation with the 352 workers affected and said it "has the ambition to retain as many people as possible within Ikea and, where this isn't possible, support them to find new employment".

Peter Jelkeby, country retail manager and chief sustainability officer for Ikea UK and Ireland said: "Although this isn't an easy decision, this is the right decision for the long-term success of Ikea in the UK."

Dave Gill, national officer for the Usdaw union, said: "This is devastating news for Ikea staff working at the Coventry store.

"We will now enter into meaningful consultation talks with the company to interrogate the business case for this proposed closure.

"Our priorities are to seek redeployment opportunities, minimise compulsory redundancies and secure the best deal we can for our members.

"In the meantime, Usdaw is providing our members with the support, advice and representation they need art this difficult time."

Ikea has managed to hold up well in the UK in recent years as the high street has suffered.

With the majority of its sites in retail parks, it hashad smaller falls in shopper numbers compared with high streets and shopping centres.

Retailers are calling on the Government to overhaul the business rates system, which many have blamed for job losses and store closures.

Chancellor Sajid Javid has promised to hold a review, although, the details and scale have not been revealed.