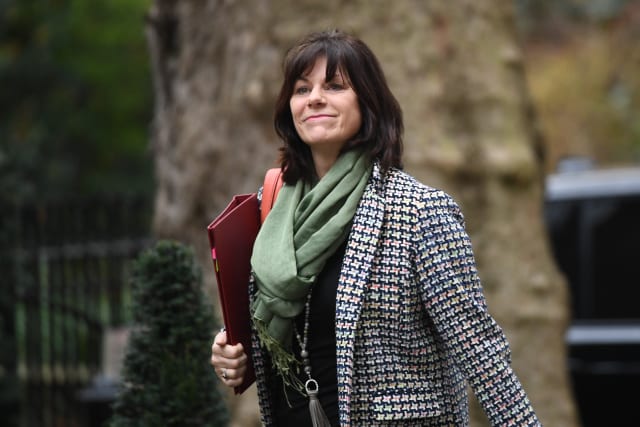 The recently sacked president of a major UN climate summit set to be hosted by the UK this year has accused Boris Johnson of a lack of leadership and “apparent dark ops” over her dismissal.

Former UK climate and energy minister Claire Perry O’Neill was fired last week as the president of the COP26 summit, which will be held in Glasgow in November.

In a letter to the Prime Minister, published by the Financial Times, Ms O’Neill said she was “surprised and dismayed” to be told she was sacked in a phone call from Mr Johnson’s senior adviser, Dominic Cummings.

In the more than 1,900-word letter, Ms O’Neill wrote: “You promised to ‘lead from the front’ and asked me what was needed: ‘Money, people, just tell us!’ Sadly, these promises and offers are not close to being met.

“The Cabinet sub-committee on climate that you promised to chair, and which I was to attend, has not met once.”

She also wrote: “You had a vision for Brexit and you got Brexit done. As I write, we have less than 7,000 hours before the start of COP26, where we have a chance to set a new global vision for climate recovery and build a new consensus for global climate action. Please get this done too.”

The former minister said she was given three different explanations for the decision to fire her, “none of which could be clearly articulated or supported with evidence, apart from needing someone more senior”.

“You did, of course, know my seniority and experience when you offered me the job,” she told the PM.

Ms O’Neill is expected to be replaced by a serving minister.

The November summit in Glasgow is seen as the most crucial round of UN climate negotiations since the Paris Agreement was created in the French capital in 2015.

Ms O’Neill also commented on an “extraordinary state of stand-off” with the Scottish Government over the summit’s budget which caused Mr Johnson to consider moving the event to England, as well as tensions with First Minister Nicola Sturgeon.

“I had asked if you would consider resetting your relationship with the First Minister – putting aside the devolution battle for the sake of this vastly more important agenda. I understand you declined in salty terms,” the former climate chief said.

Ms Sturgeon said the priority for the COP26 summit is tackling the climate crisis rather than her relationship with Mr Johnson.

She tweeted on Tuesday: “To be clear – @scotgov wants #COP26 to be a success & will play our full part in making it so. It’s not about Boris Johnson or me – it is about tackling the climate crisis.

“My commitment is that political differences will not stop me and my government working to make it a success.”

Ms O’Neill also accused Number 10 of putting out “awful, false and distorted defamatory allegations” in media briefings to support the decision to fire her, including a historical bullying allegation which she said was investigated and found to be without merit.

“Just for good measure, almost every negative media story (and none of the good stuff) over the last 11 years was included in the briefings just to spice them up and to detract from the real failings and real concerns about the COP26 process and progress,” she wrote.

“Given my track record and our long and honest working relationship, that is quite disgraceful.”

Ms O’Neill added that the Government needed to collaborate internationally on climate change and said: “To do that will require a whole of government reset and for your team to move the vast and immediate challenge of climate recovery to the top of the Premier League of their priorities from where it is now – stuck currently somewhere around the middle of League One.”

She also said the COP team were “miles off track” on the agenda for the talks due to a lack of leadership from the PM and stressed that, while the team did not report to her, she had attempted to intervene in some of the issues.

“My intercessions have regretfully been perceived as undermining rather than supportive, as is so often the case when ‘politicians’ meddle with the workings of Whitehall,” she wrote.

Ms O’Neill ultimately stressed that the “real issue” was about climate change.

She said: “The last time we saw numbers like this was three million years ago when sea levels were 20 metres higher than now and beech trees grew in Antarctica.”

“Unless we break this trend now and start sustained reduction in global emissions with a clear net-zero landing zone by 2050 or shortly afterwards, we will be dealing with unprecedented climate conditions and vast economic and human consequences within decades, not centuries.”