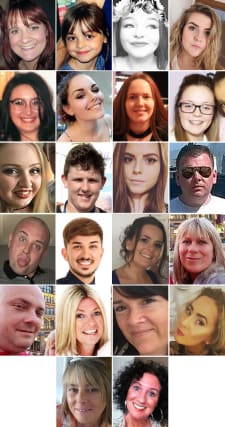 The brother of the Manchester Arena bomber helped to make the explosives which killed 22 people and injured many others who were caught up in the “ferocious” blast, a court has heard.

Hashem Abedi, 22, was allegedly linked to the bombing by a scrap of metal from a Consumer’s Pride vegetable oil can found at the scene of the carnage.

He had also allegedly bought screws and nails for deadly shrapnel and used fake online accounts to purchase two of the three chemicals to make TATP explosives, jurors were told.

His brother Salman Abedi, 22, then detonated the large device as music fans were leaving an Ariana Grande concert at 10.31pm on May 22 2017.

Opening the younger brother’s trial at the Old Bailey, Duncan Penny QC said: “The prosecution’s case is that this defendant is just as guilty of the murder of the 22 people killed as was his brother.

“He is equally guilty of the attempted murder of many others and in doing so he was guilty of agreeing with his brother to cause an explosion or explosions of a nature likely to endanger life.”

The court heard how Salman Abedi, carrying the bomb in a rucksack, joined the throng of parents and families picking up young concert-goers in the foyer of the 21,000 capacity venue, before detonating.

Mr Penny said: “Such was the ferocity of this explosion that Salman Abedi was dismembered in the process.

“The scene that met the survivors and those that attended thereafter was one of destruction and chaos.

“In all, 237 were physically injured in addition to those killed, whilst a total of 670 people have since reported psychological trauma as a result of these events.

“The bomb which was detonated was self-evidently designed to kill and maim as many people as possible.

“It was packed with lethal shrapnel and it was detonated in the middle of a crowd in a very public area – the intention being to kill and to inflict maximum damage.”

An illustration of the aftermath appeared to show the bomber’s head and upper torso in Victoria Station ticket hall, well away from other body parts strewn in the foyer.

Mr Penny said the explosion was the result of months of planning, experimentation and preparation by the brothers.

Hashem Abedi had allegedly assisted and encouraged his brother by obtaining chemicals and sourcing oil cans from his work at a takeaway in Greater Manchester, saying he wanted them for scrap.

His fingerprints were later found on scraps of metal from the cans at the family home in Fallowfield, Manchester, and at his brother’s rented flat in the city centre, the court heard.

A piece of metal retrieved from the bomb site was a “perfect mechanical fit” for the other scraps at the two addresses, which were the very same type as the cans at Abedi’s work, it was alleged.

Mr Penny said the cans played a “pivotal role” in the design of the bomb container, even though it was probably constructed out of a soft drinks can and cylindrical money tin.

In mid-April 2017, the brothers also purchased a Nissan Micra to store bomb-making equipment, the court heard.

The pair, whose parents are Libyan, had allegedly begun to show “some signs of radicalisation” in the years before the bombing, Salman more than Hashem.

Hashem, originally from Manchester, denies 22 counts of murder, attempted murder and conspiring with his brother to cause explosions.

Members of the victims’ families attended the trial, which is due to go on for eight weeks.