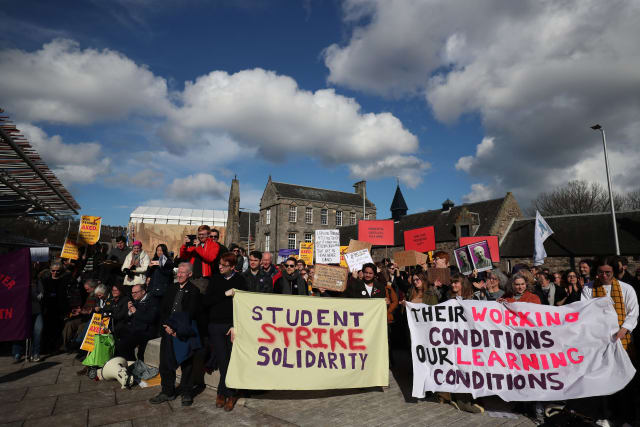 Staff at 13 universities across Scotland are to go on strike over 14 days amid disputes involving pay and pensions.

University and College Union (UCU) members will take the industrial action alongside 61 institutions across the UK in February and March.

The strikes are over two separate disputes, one on pensions and the other on pay and conditions.

UCU general secretary Jo Grady said: “If universities want to avoid further disruption they need to send their representatives back to the national negotiating table with solutions to deal with rising pension costs and address the problems over pay and conditions.

“We have been clear from the outset that we would take serious and sustained industrial action if that was what was needed.

“As well as the strikes starting later this month, we are going to ballot members to ensure that we have a fresh mandate for action until the end of the academic year if these disputes are not resolved.”

The action will start on Thursday February 20 and escalate each week, culminating with a week-long walkout from Monday March 9 to Friday March 13.

Institutions involved due to the pay and conditions row are Glasgow Caledonian University, Glasgow School of Art and Queen Margaret University.

The Scottish Association for Marine Science is taking action due to the pensions dispute.

The union said it would ballot members after this wave of strikes if the disputes could not be resolved to ensure branches could take action until the end of the academic year.

Members are also undertaking action short of a strike, which includes working strictly to contract, not covering for absent colleagues and refusing to reschedule lectures lost to strike days.

A spokesman for Universities & Colleges Employers Association (UCEA), which represents employers in the pay dispute, said: “We are dismayed, and many higher education institutions will be so too, to see UCU’s HEC decide to ask the union’s members to once again use damaging strike action over last year’s national pay demands.

“Strike action should always be a last resort and we believe that UCU’s 70,000 members in the 147 institutions should now be given a say.

“There are new ways forward being offered by HE employers, UCEA has made available significant positive proposals on key issues in UCU’s dispute – contractual arrangements, workload/mental health and gender pay gaps/ethnicity pay – developed following two months of talks with UCU.

“Strikes in less than half the universities in the multi-employer negotiations are not the answer and are in real danger of undermining the national collective pay bargaining arrangements.”

A spokesman for Universities UK (UUK), which represents employers in the pensions dispute, said: “We regret that UCU are planning further strike action at a time when positive talks on the future of the scheme are making significant progress and are ongoing.

“Despite this, UCU continue to request that employers pay still higher contributions at unaffordable levels.

“By law, pension costs had to rise to maintain current benefits.”

He added: Employers have agreed to cover 65% of these increased costs, taking their contribution to 21.1% of salaries from October 2019 – together committing £250 million more a year.

“Members have been asked to make a fair contribution, too.

“The best way forward is to work collectively to secure a pension scheme that is highly valued and affordable for all.

“The current tripartite talks between UCU, USS, and UUK, which are set to continue at least until March, are building a shared understanding on the future of the scheme, jointly developing governance reforms and considering alternative pathways for the 2020 valuation.

“Universities will put in place a series of measures to minimise the impact of industrial action on students, other staff and the wider community.”