Tottenham complains to BBC over racism claims during The One Show

Tottenham Hotspur's lawyers have written to the BBC accusing producers of unfairly singling out the club for alleged racism during its flagship The One Show programme.

And the PA news agency understands the Premier League football club is so far dissatisfied with the publicly-funded broadcaster's response to its concerns about the episode aired to mark Holocaust Memorial Day.

Fans of Spurs, which has a prominent Jewish following, have branded the segment "disgusting" and called for the BBC to make a formal apology.

The north London club has taken issue with footage in the episode that delved into allegations of racism against Spurs fans involving black Chelsea player Antonio Rudiger during a derby last year.

Police and club investigations found no evidence to support the claims. 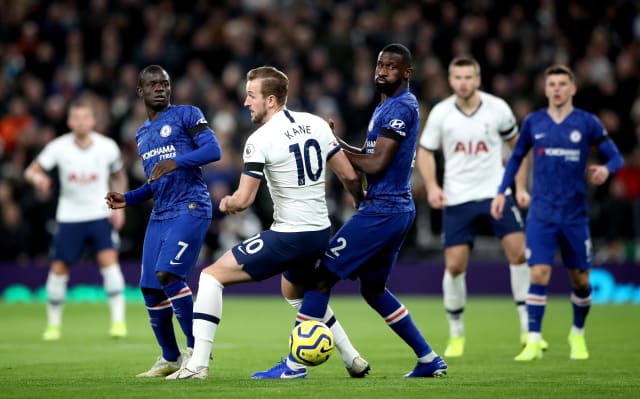 After being contacted by PA, the BBC admitted it "did not make sufficiently clear" that no evidence of racism was found – and said it will edit the film, which is still available to view on its iPlayer, to reflect this.

In a voice-over during the segment, BBC religion editor Martin Bashir tells viewers that some in society are continuing to use "football to express their racial hatred".

During the programme, team vice-captain Harry Kane is shown making comments about how people "did nothing" to intervene in the Nazi genocide, as part of a video made by The National Holocaust Museum.

The England striker's words are immediately followed by aerial shots of the Tottenham Hotspur Stadium and images from a clash between Spurs and Chelsea during which racial allegations were made against the home fans.

Tensions flared at the top flight encounter on December 22 when play was halted after German defender Rudiger said he heard monkey noises coming from the home stands.

Chelsea captain Cesar Azpilicueta discusses the events of the Spurs match during The One Show, saying: "To have this kind of discrimination is very sad."

The Metropolitan Police and Tottenham both conducted investigations, but they were closed on January 6 after finding "no evidence to corroborate or contradict" the allegations of racial abuse.

In its January newsletter, the Tottenham Hotspur Supporters' Trust (THST) told fans the club's lawyers were "currently in touch with the BBC".

"We were contacted by a number of supporters following an item on BBC One's The One Show on January 27," the trust wrote.

"We raised the issue with Tottenham Hotspur FC, and the club's lawyers are currently in touch with the BBC.

"While those discussions are ongoing we cannot make any further comment, but will update when we can."

Tottenham Hotspur said it would not be commenting on the ongoing discussions with the BBC when approached by PA.

One Spurs fan claimed on Twitter that supporters had submitted official complaints to the BBC.

Another fan, season ticket holder Loraine Bergstrom, accused the BBC of "bias reporting" and of "portraying Spurs to be a racist club".

She said the "misrepresentation" of Spurs was "disgusting" and called for the BBC to apologise.

"The club was totally misrepresented during the whole report with cheap bad journalism by someone who hadn't done any research," she told PA.

"Surely it would have been more beneficial to the report to have shown the England versus Bulgaria game where there was blatant racism."

The One Show, watched daily by five million people, did not mention that Chelsea banned a fan for life after concluding they had racially abused Raheem Sterling at a home game in December 2018.

The BBC said: "We do not accept that this short film implied that Spurs had in any way ignored racist behaviour.

"The report concerned a mural commissioned by Chelsea Football Club and a video produced by the National Holocaust Museum to commemorate the 75th anniversary of the liberation of Auschwitz.

"Harry Kane was featured as part of the video alongside other footballers and no reasonable viewer would have drawn the conclusion that this was about Tottenham's response to the complaint of racist behaviour during the match between Spurs and Chelsea, or that Harry Kane was being critical of his Club or employers.

"However, we acknowledge that the use of images of the Spurs v Chelsea match did not make sufficiently clear to the viewer the subsequent outcome of the police and club investigation and we will edit this section of the film."