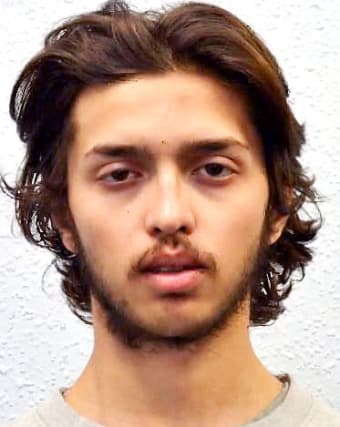 The terrorist who attacked two people on a busy London street was released from prison despite reportedly telling a fellow inmate that he wanted to murder an MP.

Sudesh Amman was shot dead by police around a minute after launching an attack on two bystanders in Streatham High Road, south London, on Sunday. A third person was injured by flying glass during the gunfire.

Police said he began stabbing the victims about 60 seconds after entering a shop, where he stole a knife and removed the packaging as he ran from a staff member.

The 20-year-old, who was jailed for possessing and distributing terrorist documents in December 2018, was freed from prison less than a fortnight ago and had been staying at a bail hostel in nearby .

A former prisoner who spent time with Amman in Belmarsh high-security prison told The Times: “The guy was definitely insane and he never hid his intentions, so it’s crazy how he even got out of jail.”

The man said Amman wanted to copy the murder of MP Jo Cox and told him “the only way to get these filthy kafirs (non-believers) out of Syria is to take out MPs like that white guy did with the lady in 2016,” The Times reported.

The former inmate told the newspaper that Amman “wanted to do something real, something organised like the (IRA) used to do”.

IS supporter Amman, who at the time of his sentencing was 18 and living in Harrow, smirked as he was jailed for three years and four months at the Old Bailey in December 2018.

The Metropolitan Police said he was released from prison on January 23 2020.

Meanwhile, analysis by foreign policy think tank, the Henry Jackson Society, suggests that more than 10 terrorists are due to be released from prison in 2020.

On Monday, Justice Secretary Robert Buckland said emergency legislation is needed to make sure terrorists are not released automatically from prison half way through their sentence.

Mr Buckland said offenders will not be considered for release until they have served two-thirds of their sentence and that no terrorists will be released before the end of their full custodial term unless the Parole Board agrees.

The Parole Board would be “strengthened” to deal more effectively with the risks that terrorists pose and steps would be taken to introduce the plans “as soon as possible”, he said.

The Government will also consider making new legislation to ensure that extremists are more closely monitored on release and will review whether the current maximum sentences for terrorist offences are sufficient.

Legal experts raised concerns about plans to apply the new rules to prisoners who have already been sentenced, with former independent reviewer of terrorism legislation Lord Carlile telling BBC2’s Newsnight: “I think it may have gone too far.

“The decision to lengthen the sentences of people who have already been sentenced, and therefore expected to be serving half the sentence the judge imposed upon them, may be in breach of the law.

“It is certainly going to be challenged.”

Scotland Yard said armed officers were following Amman on foot as part of a “proactive counter-terrorism surveillance operation” when the incident took place.

The three victims were taken by ambulance to south London hospitals.

One man, in his 40s, is in a serious but stable condition, police said.

A woman in her 50s, a teacher at a nearby school, had non-life threatening injuries and has been discharged from hospital.

Police said a second woman, in her 20s, who suffered minor injuries believed to have been caused by glass following the discharge of a police firearm, has also left hospital.