Starmer: I will take on ‘man without principle’ Johnson 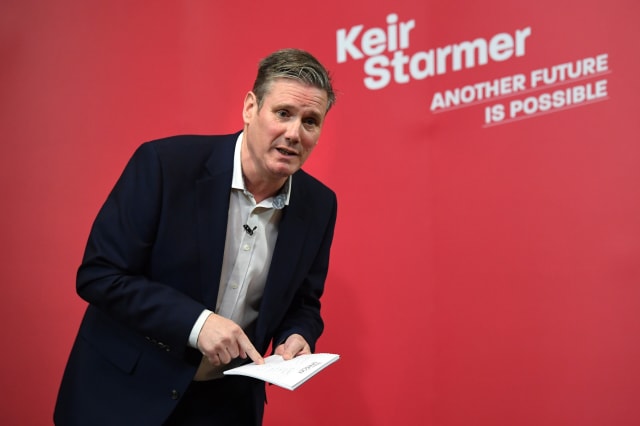 Sir Keir Starmer has branded Boris Johnson “a man without principle” and insisted he could unite Labour into an effective opposition.

The shadow Brexit secretary rejected claims the party would be misogynistic if it elected him as the next Labour leader ahead of his three female rivals.

Sir Keir said he would back increased paternity leave, fundamental constitutional reform and sweeping changes to the way Labour has handled anti-Semitism if he won the contest to replace Jeremy Corbyn.

Answering questions on parenting website Mumsnet, Sir Keir said Labour’s “overloaded” manifesto and a lack of trust in the party to deliver on its promises had contributed to its general election drubbing.

Sir Keir said: “I think I have the relevant skills and experience to carry out what I see as the essential tasks, that includes uniting our party (the old saying, divided parties don’t win elections, is true), being a forceful and effective opposition against Johnson – a man without principle who doesn’t know truth from untruth, and forging a path to victory.”

“I genuinely think all of us are standing because of what we sincerely believe is right for our party, our movement and our country.”

Rebecca Long-Bailey, Lisa Nandy and Emily Thornberry are Sir Keir’s rivals for the job and he indicated they all had a role to play if he won.

“Many members have commented to me during this leadership election contest that it is filling them with hope because they see the future leadership team of the Labour Party in all the candidates,” he said.

Sir Keir backed a call for firms to publish their parental leave policies and suggested fathers should get increased statutory time off, saying “society should expect as much of new dads as it does of new mums”.

“I think we should look at models in other countries, such as Sweden, which encourage both parents to take time off in the first 18 months of a child’s life,” he said.

Sir Keir said he would take “personal responsibility” for tackling anti-Semitism within Labour.

“My test for our party will be this; do those who have left the party because of anti-Semitism feel comfortable to return? Only when they do, will I be satisfied that we have made progress.”

He said the country needed a “process of democratic renewal”, with electoral reform, the abolition of the House of Lords and “federalism” to give more powers to the devolved administrations.

In response to the traditional Mumsnet question about what kind of biscuit he prefers, Sir Keir responded: “The one in front of me right now at the end of this hour, which is a chocolate digestive, but won’t be for much longer.”