Russian destroyer among warships expected to pass through English Channel 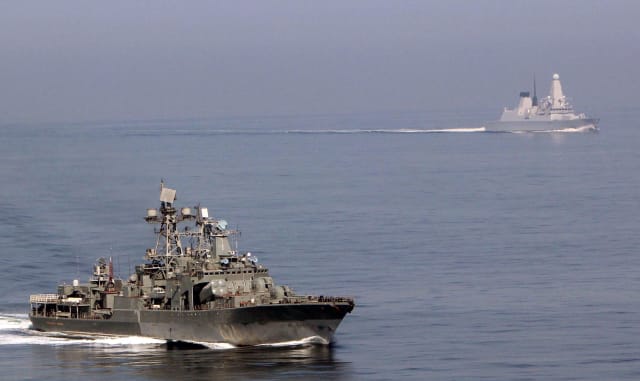 Russian warships are set to pass through the English Channel in the coming days, the PA news agency understands.

The ageing Vice Admiral Kulakov destroyer is returning from the Mediterranean with fellow warships from the Russian navy’s Northern Fleet.

Led by missile cruiser Marshal Ustinov, the group  is heading home in the first half of February, a journey that is expected to take it through the narrow Dover Strait.

Russian warships of the Northern and Baltic Fleets routinely pass through UK-area waters en route to deployments in the Mediterranean and Gulf regions, the Royal Navy said previously.

Named after a decorated Soviet naval officer, the Vice Admiral Kulakov is an Udaloy-class destroyer and an anti-submarine specialist.

Together with the Marshal Ustinov and their support ships, it passed through the Strait of Gibraltar on January 26, according to the Russian defence ministry.

In recent days they have been carrying out naval exercises in the Bay of Biscay off Spain.

They are expected to arrive at the port of Severomorsk in Russia’s Murmansk Oblast in the first half of February.

The Vice Admiral Kulakov and Marshal Ustinov are no strangers to British waters, having been shadowed by Royal Navy warships on previous occasions

In August 2019 HMS Medway followed the progress of the Marshal Ustinov as she sailed from the North Sea, past Dover and into the Channel.

The then-brand-new Royal Navy patrol ship was dispatched from Portsmouth and spent 36 hours monitoring the Russian vessel before handing over to French naval forces.

Somerset, a Plymouth-based Type 23 frigate, detected and monitored the movements of the Vice Admiral Kulakov and her supporting tanker and escorted them through UK waters and along the coast of Norway.

In March 2016 the Vice Admiral Kulakov passed through the English Channel and up the east coast of the UK as it returned from a deployment to Syria.

HMS Somerset, along with her Merlin helicopter, was used to detect and monitor the movement of the Russian warship and escorted it through UK waters.

The Vice Admiral Kulakov also visited British waters in 2013 under different circumstances, taking part in a commemoration of the 70th anniversary of the Battle of the Atlantic.