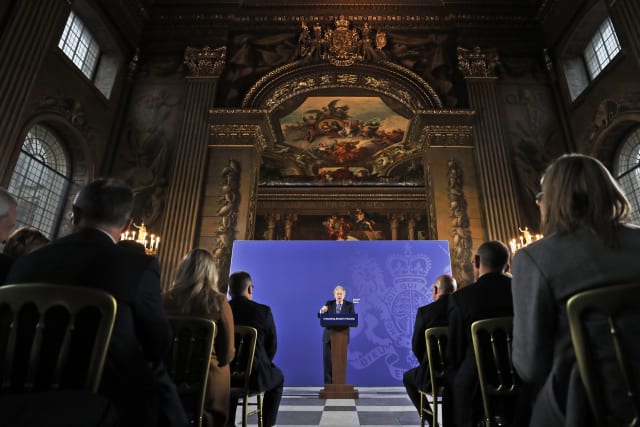 The scene of Boris Johnson’s key speech outlining his vision for the UK after Brexit was chosen to make an audacious statement.

A painting dubbed “Britain’s Sistine Chapel” depicts on the expansive ceiling of the Old Royal Naval College hall some 200 figures in an “incredible story of political change, scientific and cultural achievements, naval endeavours and commercial enterprise”.

“The central narrative focuses on a pivotal moment when the United Kingdom was created and became a dominant power in Europe,” the museum’s website says of Sir James Thornhill’s masterpiece.

That was in the 18th century.

But the Prime Minister will hope that the nation maintains that influence on the continent, and does not become the critics’ vision of a small nation drifting towards Donald Trump’s America.

The Painted Hall in Greenwich, south-east London, was also the site where Lord Nelson lay in state after being killed on HMS Victory in his final battle leading the British Empire against France and Spain.

Gesturing to the ornate ceiling above him, Mr Johnson said the painting represents a “supreme national self-confidence” and said the UK is to “embark now on a great voyage”.

“Look at these well-fed nymphs and cupids and what have you. They are not just celebrating the triumph of liberty and peace and tyranny,” he said.

“This is the settlement of a long and divisive political question about who gets to sit on the throne of England.”

The result, he said, was “stability and certainty and optimism, and an explosion of global trade” with the 1688 accessions to the throne of King William III and Queen Mary II.

“So this is it,” he told business leaders and diplomats, some of whom would reward him with a standing ovation.

“This is the newly forged United Kingdom on the slipway. This is the moment when it all took off.”