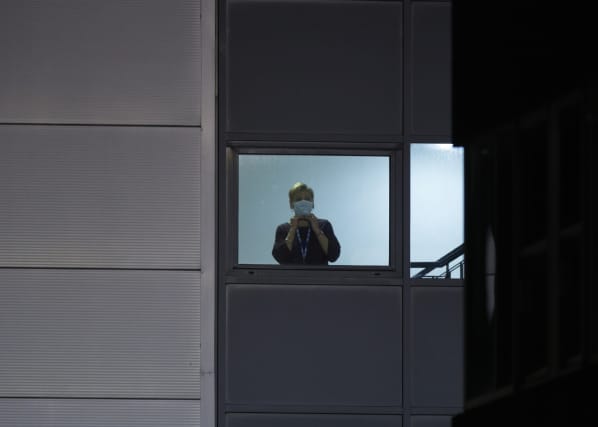 A British father currently being quarantined at Arrowe Park hospital with his wife and newborn son claims a Foreign Office official withheld his son's birth certificate from the Chinese authorities to allow him to leave the country.

Michael Martin, a British citizen, was initially told he would not be able to bring his wife and son back to the UK, as they are Chinese citizens.

The rules changed hours before the flight — however, his son did not have a passport, and they instead presented his birth certificate to Foreign Office officials before being allowed into the airport.

Mr Martin, who has lived in Wuhan for nine years, said: "I was later told one of the FCO officers held back my son's birth certificate in case the Chinese officers wouldn't accept it. I am so thankful for this quick thinking."

After entering the airport, his son was then given an emergency passport and they were eventually allowed to board the plane.

The family were among the 83 evacuees flown back from the Chinese city on January 31.

The Foreign Office said it did not comment on individual cases.

Mr Martin told the PA news agency: "It was very stressful. It was a risk even taking my baby outside, but we were willing to try to get out of Wuhan.

"We were already worried about him flying so young, plus the fact we may be flying with someone infected."

After the city was locked down on January 23, he was originally told his wife and three-month-old son would not be able to return with him.

He said: "Of course I was not going to leave without them."

The evacuation flight was scheduled for 5am on Friday, and at 1am, Mr Martin called the Foreign Office again to see if his family would be allowed to return home with him.

He was told all British citizens and their dependants were now allowed on the plane. Despite not having a passport for his son, they raced to the airport.

Mr Martin said the family have been given an apartment away from the other evacuees at Arrowe Park.

He said: "There is still a social area downstairs to collect food and drinks and supplies.

"But we won't be taking our baby outside.

"We have been told none of the 83 are showing any symptoms."

Staff at the hospital have provided essential items for the baby, including clothing, formula, a baby bath and changing mat.

"They just came to check on us now, really feel safe here," he said.

Ten more passengers returned from coronavirus-hit China on Sunday — with one taken ill and escorted to hospital.

China's health commission reported on Sunday there have been 361 deaths and 2,829 new cases in the last 24 hours — bringing the number of Chinese cases to 17,205.

The World Health Organisation (WHO) said the number of coronavirus cases will keep growing because tests are pending on thousands of suspected sufferers.

Nearly 100 people are being kept in isolation at Arrowe Park Hospital in the Wirral.

Kharn Lambert, a PE teacher, who has lived in Wuhan for the last five years, told Sky News: "It's quite weird being home but not being home, and also being locked in – almost like being back in Wuhan really – where we can't get outside certain perimeters and go further, so it's a bit of a weird feeling really.

"Everybody is in good spirits," he added. "As you can imagine, it's not the best of circumstances but we're all trying to keep our spirits high.

"We're playing jokes on each other, we're having a laugh when we have the chance to see each other."