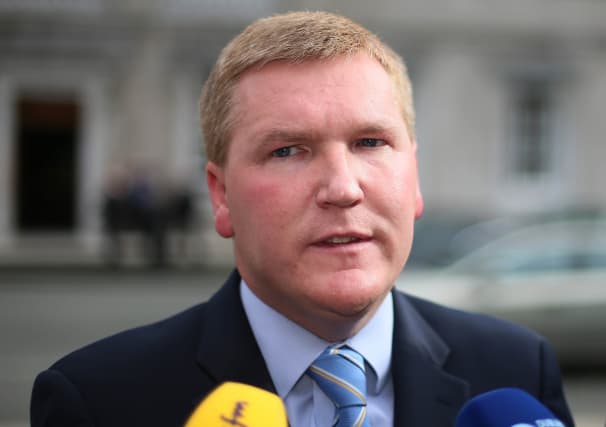 As the General Election campaign enters its final week, political parties will be making their final attempts to secure votes.

Outlining Fianna Fail’s strategy for the final campaigning days, Mr McGrath used the opportunity to hit out at Sinn Fein, who has tied first place with the party in a recent opinion poll.

“These policies are fantasy policies that will not add up in the real world,” he said.

“In the real world, people change their behaviour, they make investment decisions depending on the change in taxation and enterprise landscape in the country.

Speaking at their election headquarters in Dublin, Mr McGrath also claimed that Sinn Fein’s tax policies will “boomerang back into the face of the very people that they are saying they’re going to help”.

Micheal Martin was also pressed on his party’s position on going into government with Sinn Fein after a number of his TDs and candidates indicated they would be open to working with Mary Lou McDonald’s party.

“It’s not just about the past but about the future as well,”  Mr Martin told RTE.

“I was in Killarney yesterday, thriving in tourism, Sinn Fein tax proposals would destroy the enterprise that was so evident and has made Killarney what it is in terms of employers.

“Do not underestimate the strength of will within the Fianna Fail party who have all rejected the prospect of a Fianna Fail-Sinn Fein coalition.”

The Fianna Fail leader also said he has “no issue” with Ms McDonald taking part in the final televised leaders debate.

Asked about Leo Varadkar’s comments in which he said that Fianna Fail has “a lot of backwoodsmen”, Mr Martin said it was beneath the office of An Taoiseach.

Meanwhile, Mr Varadkar kicked off his final week of campaigning saying he will work until the final moments to convince people to vote for Fine Gael.

He raised concerns over other parties’ pledges to reduce the pension age back to 65.

“I appreciate what we’re offering is less than what the other parties are offering on this, but I’m concerned that what’s happening is an auction and an auction that could result in us auctioning off the pensions of the young,” he added.

Acknowledging that Fine Gael is behind in the opinion polls, he claimed they are only a “snapshot in time”.

He added: “There have been a lot of comments about me in this campaign from various different angles and I don’t believe that this election campaign is about me. I believe it’s about 4.5 million citizens of Ireland.”