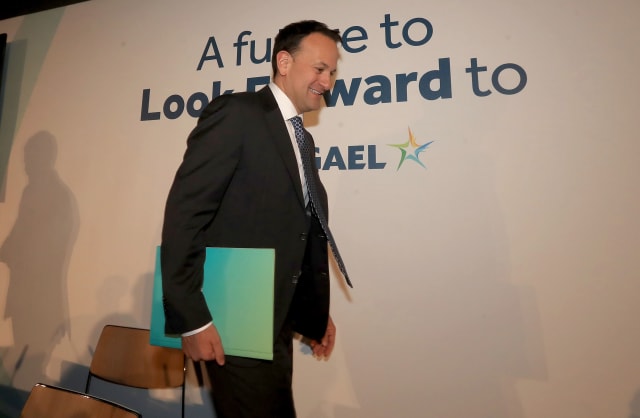 Activists from an environmental protest group have sprayed green dye over a Fine Gael office, accusing the party of “greenwashing” the public over its environmental record.

Members from the group Extinction Rebellion Ireland (XRI) staged the protest in a bid to “expose” Fine Gael’s electoral campaign.

Up to 30 demonstrators coated the steps of Fine Gael’s Dublin office in uranine dye.

The group has called for the party to “come clean” about the record on tackling climate change issues.

While ERI says it does not endorse any political party, it has called for the electorate to challenge General Election candidates on their climate action commitments.

Protester Claire Brennan said: “Fine Gael has talked about climate action while they have been in government but have failed to take any meaningful action.

“Coming up to the election they are talking about it more and using it to garner green votes, which we call ‘greenwashing’.

“It’s using green PR to manipulate the public into thinking that their policies are environmentally friendly in order to get more votes.

“We are not here to attack Fine Gael specifically.

“We have scrutinised their actions, and any other party that will be in government will be under the same scrutiny.

“This is a warning we are on to the politics of it and we want some real action.”

A report from the Intergovernmental Panel on Climate Change (IPCC) stated that global emissions need to be reduced by 8% per year until 2030 to avoid global temperature rising over 1.5C.

Ms Brennan added: “We want policies that will guarantee at least 8% reductions, really Ireland should be doing more since we have contributed heavily to the crisis.

“We would be looking for clean public transport and action across all sectors.”

“However in their election campaign they have been saying they have been doing great work in terms of climate action and they will continue to do this great work which we know is not true judging on their past work,” she added.

“The green paint symbolises greenwashing, which happens when a company or government pretends to care a lot about the environment and reflects this in their products but it’s really a way to disguise climate dis-action.”