A young man who suffered a smashed skull when a drunk driver rammed through locked gates has slammed the soft sentence handed to him - of just a £200 fine.

Frank Richardson, 21, was waiting for a train when the heavy wrought iron security gates flung open and smashed him in the face.

Drunk driver Benjamin Elvey, 21, was behind the wheel when he rammed his way out of the locked car park after a night out.

Mr Richardson, a butcher, suffered a smashed skull and a bleed on the brain following the incident on April 7 last year. 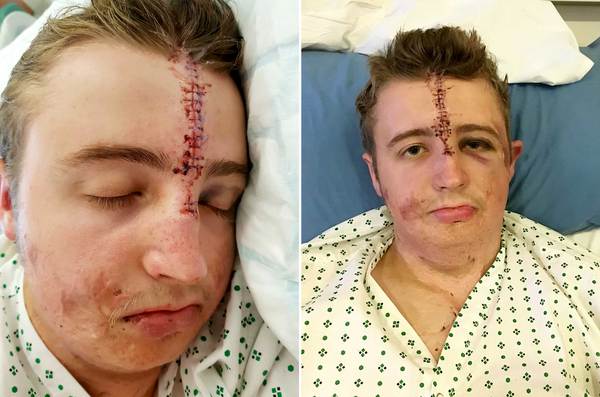 The court heard railway engineer Elvey locked himself inside the car park of the Severn Valley Railway in Kidderminster, Worcestershire, following a night out.

After calling security to unlock the gate, he decided not to wait for them to arrive and instead rammed his car through the barrier.

The right side of the gate was ripped off as Elvey crashed into it, while the left side swung open and hit Mr Richardson on the head.

Elvey was handed a 20-month prison sentence, suspended for two years and ordered to do 275 hours of unpaid work.

Mr Richardson of Droitwich, Worcestershire, blasted the sentence and recalled ringing his parents from hospital, believing he was going to die.

"I decided to stop and sit on the kerb by where the gates are. I remember hearing the revving of a car, and then I don't remember anything after that.

"Next thing I knew I was waking up on the floor and I was soaking wet. There was something dripping from my head.

"I touched my head and realised it was blood. I remember getting up and I staggered across to where there's a huge billboard advertising Severn Valley Railway.

"I collapsed, and I was laying against the sign. The ambulance came and then took me away to A&E.

Richardson said he was in and out of consciousness and didn't know the severity of his injury.

"I then called my parents as I thought I was going to die.

"I repeatedly asked a nurse what was going on and she eventually said I had a fractured skull and a bleed to the brain."

Frank, who was forced to give up his job as a butcher and his hobby as a volunteer on the railways, slammed the soft sentence handed to Elvey.

He said: "I would have liked the 20 months sentence to have been in prison for that time, instead of suspended, but it is what it is.

Frank spent one night in Worcestershire Royal Hospital before having an operation to realign his fractured skull.

"Luckily, my skull has healed, and all is left is a scar on my head."

Frank has been having occupational therapy since October, as the accident has left him with short-term memory loss and anger issues.

He said: "It has affected my life. Last year was hard and I have lost so much."

The Isis-inspired weapon of choice where terrorists 'emulate each other'