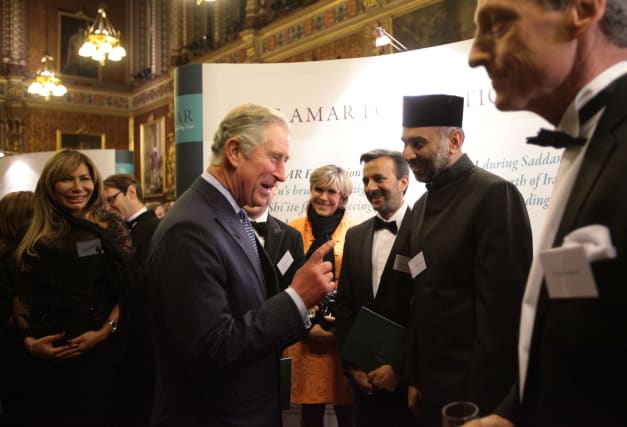 The Prince of Wales will welcome to the UK a choir of young Iraqi women who have used music to help cope with the horrors in their homeland.

The group – some of whom were used as sex slaves by fighters from so-called Islamic State (IS) – will be greeted by Charles during a private reception in London on Wednesday as they make a whistle-stop tour of the UK.

Charles is patron of the Amar Foundation, which provides emergency aid, education and healthcare in the Middle East, and through its music programme has brought over the choir of Yazidi women.

Violinist Michael Bochmann is leading the charity’s British Council-funded music project to record and preserve the religious music of the Yazidi people, a minority persecuted in Iraq, and has formed the choir as part of a parallel project to keep Yazidi folk music alive.

The musician and educator said many of the young women had been in a “state of shock” after being abused by the IS fighters: “What we’ve done, we’ve specifically formed a group of girls and it’s transforming their lives, it’s making them feel much, much better.

“It’s allowing them to move on from this horrific bit of history they’ve been through, to living normal lives and being part of their community again, and not being frightened to go out the front door.”

Mr Bochmann, who is professor of violin and chamber music at Trinity Laban Conservatoire of Music and Dance in London, said in 2014 IS fighters targeted Yazidi communities, killing men and taking women as sex slaves, with the majority of survivors now living in refugee camps afraid to return to their villages.

He said: “The Yazidis are a minority of about half a million people in northern Iraq, they have their own religion, it’s not Muslim, it’s not Christian, it goes back thousands of years to the mists of time.”

In the summer of 2019 Amar began recording Yazidi religious music for prosperity and the archive will be presented to Oxford University’s Bodleian Library on Tuesday followed by a performance in the new wing of the library.

Speaking about the benefits of the music project for the young women, the violinist said: “It puts them back in touch with their culture and it’s like music therapy, and also brings out a sort of club atmosphere.

“When we’ve had the young people come to the classes they learn the music but they don’t want to go away again, there’s an incredible community feeling.”

The choir have already taken part in a masterclass with Professor Bochmann at the Trinity Laban Conservatoire and on Thursday will attend an event at the Houses of Parliament.

Baroness Nicholson founded Amar in the early 1990s in response to Iraqi dictator Saddam Hussein’s systematic attacks against his people in the south of the country.