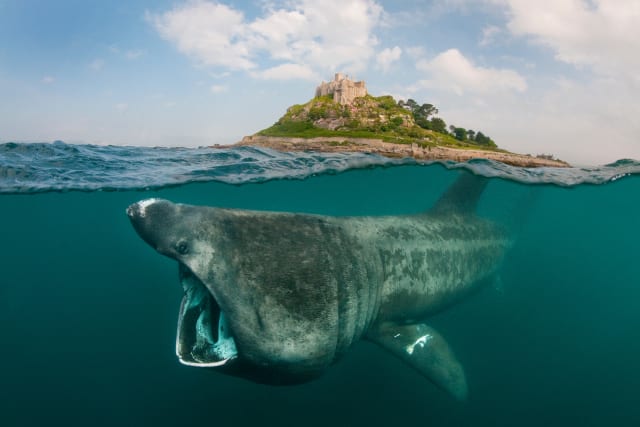 Basking sharks defy predator stereotypes by taking their families to feeding spots they have eaten at before.

A study led by the University of Aberdeen found that basking sharks – the world’s second-largest fish – prefer to travel with their relations to familiar feeding sites.

The endangered species had previously thought to migrate in unrelated groups, but new sampling revealed their tendency to travel as extended family parties through familiar feeding routes.

“This means there’s more going on in basking shark aggregations than first appears in that they don’t fit the shark stereotype of a lonesome independent predator.”

The northern European shelf is a rich source of plankton, making the north east Atlantic ocean a popular areas for the fish, with hundreds of basking sharks gathering on the west coast of Scotland, Ireland and the Isle of Man in the spring.

Professor Les Noble, a joint leader in the study, said: “Until this study the perception was they moved into warmer waters from globally distributed localities, sniffing out a plankton meal as they got closer to feeding sites, collecting in aggregations of unrelated sharks — like gourmets headed into town chancing on finding a good restaurant by smell.

“Now we know basking sharks book in advance at known Michelin starred venues, and take the family along!”

Scientists raised concerns about the species’ declining population, with numbers not expected to exceed  10,000 in north east Atlantic waters.

Dr Jones added that offshore renewable projects could also be posing a risk to the species, which is classed as endangered on the ICUN red list.

Highlighting environmental change and fishing accidents as a threat to basking shark populations, Dr Jones said: “Losing a group of kin together, such as occurs during accidental bycatch, erodes variation rapidly, making these big, slowly reproducing fish less capable of evolving to cope with environmental change.

“That, and a tendency to utilize areas currently designated for development of marine renewable energy, may not produce a happy outcome unless we see intelligent management of marine environments.”