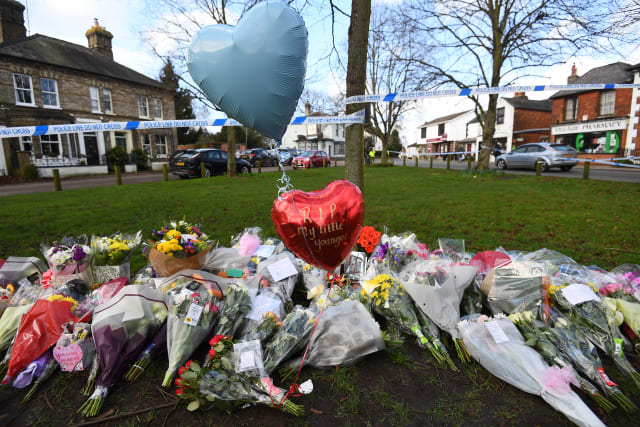 Two men have been arrested on suspicion of murder after a teenager was stabbed to death outside an Essex pub.

The victim, named locally as 19-year-old Liam Taylor, died at the scene of the attack outside the Rose and Crown pub in The Green, Writtle, on Friday night.

Tributes to the teenager described him as a “lovely and caring” individual, with more than 50 people arriving at The Green on Saturday to lay flowers and release balloons.

On Sunday, Essex Police said it had arrested two men in connection with Mr Taylor’s death.

Both remain in custody for questioning, police said.

Four men who were arrested on suspicion of murder on Friday have since been released without charge.

Another 19-year-old who was stabbed in the incident has been discharged from hospital following treatment.

Essex Police said it was carrying out extra patrols in parts of Chelmsford and had been granted authorisation to use additional stop and search powers for the Melbourne Estate area until 6pm on Sunday.

It said two people were arrested on suspicion of drug driving and another person was given a cannabis warning.

Well-wishers were led in a procession and prayer by local vicar Rev Tony Cant, before taking part in a minute’s silence.

Villagers in the area spoke of their shock after hearing news of the stabbing.

On Facebook, Mr Taylor’s mother Michelle wrote: “Can’t even believe my beautiful son has been taken from me.. son u (sic) are my world and I know ur (sic) be looking down on me.”

Connor Wise, 21, from the nearby village of Great Baddow – who said he had known Mr Taylor for four years, said: “He was a lovely and caring guy, I would hang out with him in town.”

Police previously said they were treating Mr Taylor’s death as a “targeted attack”.