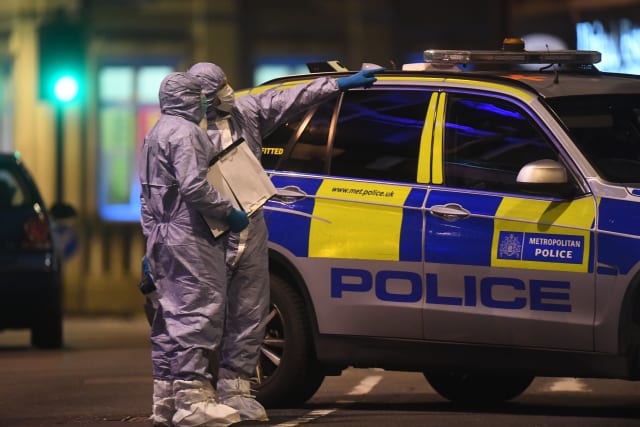 Streatham attacker Sudesh Amman had been fascinated with carrying out a terror attack using a knife, the Old Bailey heard when he was sentenced a little over a year ago.

Then aged 18, he had smiled and waved at the public gallery as he was jailed for three years and four months.

Amman is believed to have been back on the streets for just a few weeks before the stabbing attack – fulfilling one of his so-called life goals of dying a martyr.

The supporter of so-called Islamic State (IS) had pleaded guilty to possessing and distributing terrorist documents and was sentenced in December 2018.

His stash of manuals on bomb-making, knife-fighting and close combat included the titles Bloody Brazilian Knife Fighting and How To Make A Bomb In Your Kitchen.

Police found a notepad in the North West London College student's home, in which the phrase "life goals" had been scrawled.

"Top of the list, above family activities, was dying a martyr and going to 'Jannah' – the afterlife," Alexis Boon, then head of the Metropolitan Police Counter Terrorism Command, said after he was jailed.

He said Amman had a "fierce interest in violence and martyrdom" and that he was fascinated with dying "in the name of terrorism", and added that the case was "a reminder of the need to be vigilant to signs of radicalisation and report it".

Amman, who had then lived with his family in Harrow, north-west London, posted al Qaida propaganda on a family WhatsApp group, exposing siblings as young as 11 to graphic material, and had shared bomb-making literature via Skype chat.

He had told his girlfriend of his wish to carry out acid attacks and that he preferred the idea of a knife attack over using bombs.

Prosecutor Kelly Brocklehurst said police were alerted by a Dutch blogger who identified extremist material in a Telegram chat in April 2018.

There was a photo of a knife and two firearms on a Shahada flag bearing Arabic words which mean "armed and ready".

An air gun, a black flag and a combat knife were seized from his home when he was arrested in May that year.

Mr Brocklehurst said: "The defendant had discussed with his family, friends and girlfriend his strong and often extreme views on jihad, the kuffar, and his desire to carry out a terrorist attack.

"Much of his fascination with conducting an attack was focused on using a knife but reference was also made to committing acid attacks on mopeds."

The prosecutor said Amman's interest in Islamic extremism and IS in particular was "more than a mere immature fascination with the taboo and with graphic violence".

He added: "He is clearly someone with sincerely held and concerning ideological beliefs."

Amman had entered guilty pleas to six charges of possession and seven of disseminating terrorism documents.

He denied three charges, which were ordered to lie on court file.

The science and maths student had previous convictions for possession of an offensive weapon and cannabis.

He was aged just 17 when he began collecting terrorist material in 2017.