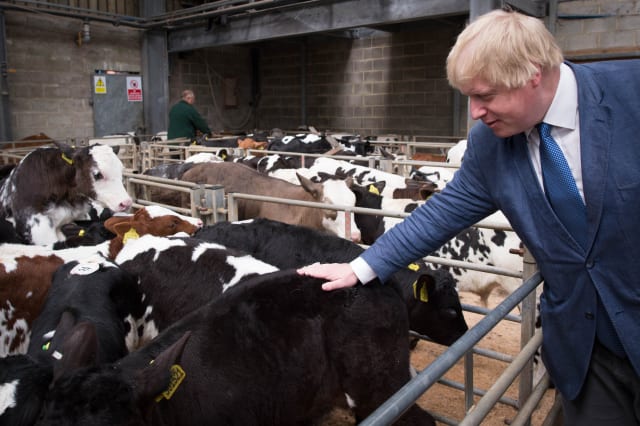 The Prime Minister has been urged to put his money where his mouth is and write his pledges into law on upholding food hygiene standards and environmental protections.

Boris Johnson, in a speech on Monday setting out his post-Brexit vision, is preparing to rule out relaxing rules on food hygiene and environmental standards when he sits down to broker trade deals with the European Union, the United States and others in the coming months.

Labour leader Jeremy Corbyn warned during the election that Mr Johnson could lower food standards to US levels in a bid to agree terms with President Donald Trump – a move that could allow rat hairs in paprika, maggots in orange juice and rodent droppings in ginger, according to the opposition party.

In a bid to ensure the PM sticks to his trade talk promises, Labour is calling on the Government to enshrine the commitments on food hygiene and environmental protections into the Agriculture Bill before trade talks start in March.

Shadow environment secretary Luke Pollard said Mr Johnson’s pledges “aren’t worth anything” until they are written into what will be the first substantial piece of post-Brexit legislation debated by MPs.

The Bill, which will have its second reading on Monday, sets out the UK’s approach to farming now it has left the EU, with ministers looking to replace Brussels’ Common Agricultural Policy (CAP) that has applied in Britain since 1973.

Mr Pollard said, without the legal assurances, chlorine-washed chicken and hormone-treated beef could be just a sample of the food products that will become available on UK supermarket shelves once the transition period is over in 2021.

The Labour agriculture spokesman said allowing such imports would not only lower standards but also undercut British farmers and producers.

The Plymouth Sutton and Devonport MP said: “We won’t accept chlorinated chicken in our supermarkets or Boris Johnson selling out our animal welfare, food and environmental protections in a bid for a trade deal with Donald Trump.

“Promises that ministers have made to maintain standards aren’t worth anything until they are written into law, and unless they do so we must surely conclude that they intend to break these promises during trade talks with the USA.”

Mr Johnson is due to give his tough-talking speech in London in front of national and international business figures, along with ambassadors to the UK from countries across the globe.

The Conservative Party leader is set to tell European leaders Britain will not follow EU rules after Brexit, and is prepared to leave on terms akin to a no-deal withdrawal.