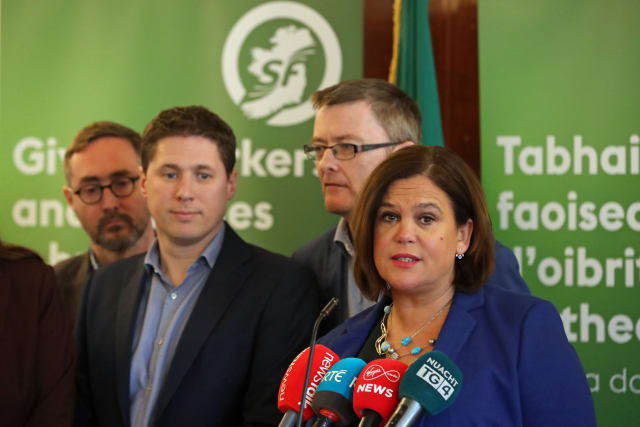 The surge in support for Sinn Fein is reflective of an energy and momentum for the party and for change, Mary Lou McDonald has said.

The party’s president was speaking in response to the latest opinion poll, which shows Sinn Fein tied in first place with Fianna Fail.

According to the latest Sunday Business Post/Red C poll, Sinn Fein is on 24%, up 3% on last week.

Speaking in Dublin on Sunday, Ms McDonald, who is running in Dublin Central, said that Sinn Fein are “very reasonable and practical” people.

“Our intent is to secure the largest possible mandate that we can, and then with the mandate we will go and speak to and listen to everybody, and our objective is to secure a republican programme for government,” she said.

“Obviously it is reflective of an energy and momentum for Sinn Fein and for a change, that’s what you are seeing.

“We will continue to campaign until the last day and the last hour because we take nothing for granted.

“I don’t know if things will get nasty, I have no interest in a personalised campaign.

“Our strong preference is a government without Fianna Fail or Fine Gael. But ultimately the people who have to make that call are the voters.

“We need to be steady on these matters and not get ahead of ourselves.

“At the end of this election, wherever the numbers fall, we will be talking to everybody.

“We will be talking to Fine Gael and Fianna Fail if they end their vow of silence with us.”

Her comments come after Taoiseach Leo Varadkar admitted that Fine Gael is lagging behind in the polls, but said the General Election is “all to play for”.

“We’re a bit behind, but everything is within the margin of error of 3%, so this election is all to play for.

“One thing that won’t happen, you won’t see a coalition involving my party and Sinn Fein. That’s just not going to happen.

“Sinn Fein, in our view, is soft on crime and also high on tax – proposals to tax business, pensions, incomes, wealth, property, you name it, to the tune of four billion euros, and that would be enormously damaging for the Irish economy, for people’s jobs and incomes and livelihoods and businesses.

“That’s definitely not going to happen. So, the likelihood is actually going to be quite difficult to form a government over the next couple of months.”

Mr Varadkar said that there will difficulty over Brexit negotiations if there is trouble forming an Irish government.

“Negotiations will take place between the UK and the EU, but we’re very much plugged into the EU side.

“We’re part of the ‘Team 27’ and we have a lot of influence in that regard as the EU trade commissioner is an Irishman,” he added.

“I think there will be difficulty if we have trouble forming a government in Ireland.

“The reason why the election is happening now is, I took the decision that now was the best time, that there was a window of opportunity to have an election here in Ireland.

“We’d have to have one anyway by spring of next year.

“I chose this as the window of opportunity to have an election and to have a new government in place by that crucial European Council meeting in March, so I know that is something the Irish public will reflect on when they go to the polls at the weekend.

“We need to have a stable government because that’s essential for our future in so many different ways.”