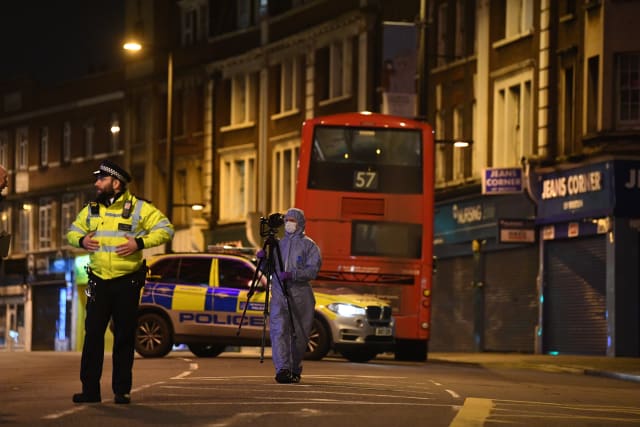 The man shot dead by police following a stabbing attack in south London was a convicted terrorist who had recently been released from prison.

It is understood that Sudesh Amman, who was jailed for possessing and distributing terrorist documents in December 2018, had been freed in the past six weeks.

Sam Armstrong, from the Henry Jackson Society, said Amman was thought to have been staying in a bail hostel in Tulse Hill.

He said the society had warned in December that Amman was due for release within the next two months and should not be let out of prison.

Amman, who at the time of his sentencing was 18 years old and had an address in Harrow, north-west London, had been jailed for three years and four months.

Two people were stabbed in the attack in Streatham on Sunday afternoon which police believe to be “Islamist-related”.

Three victims were taken to a south London hospital, with one man’s condition said to be life-threatening and one woman being treated for non-life threatening injuries.

Police said a second woman received minor injuries believed to have been caused by glass following the discharge of a police firearm.

A device found strapped to the body of the suspect was a hoax, the Metropolitan Police added in a statement.

It said: “The situation has been contained and officers from the Met’s Counter Terrorism Command are now leading an investigation into the incident.

“The incident was quickly declared as a terrorist incident and we believe it to be Islamist-related.”

One witness described seeing the man apparently carrying a weapon with “silver canisters on his chest” being shot in front of a Boots store.

Another said members of the public came to the aid of victims, with one saying she had been stabbed.

People took shelter in nearby shops as the incident unfolded on the busy south London high street.

Jonathan Bartley, co-leader of the Green Party and councillor for the St Leonard’s ward on Lambeth Council, told the PA news agency: “There’s absolute shock and disbelief from residents that are around. There was an immediate sense of panic and fear when it happened.”

He added: “The emergency services seemed to have reacted incredibly quickly, I mean so quickly that you wonder whether they had some advance warning about this because they were here in such great numbers so quickly.”

Prime Minister Boris Johnson said he will announce plans on Monday for “fundamental changes to the system for dealing with those convicted of terrorism offences” following the attack.

He added: “Following the awful events at Fishmongers’ Hall in December, we have moved quickly to introduce a package of measures to strengthen every element of our response to terrorism – including longer prison sentences and more money for the police.”

On Sunday evening, forensics officers could be seen near Superdrug and Boots examining the area for clues.

Families could be heard asking police how they would be able to access their homes in light of the incident.

Stranded residents were being offered temporary accommodation inside the Odeon cinema in the cordon, with workers at Lambeth Council inside looking after those affected.