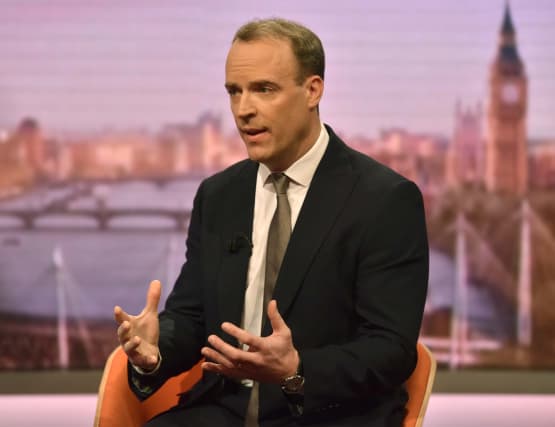 Foreign Secretary Dominic Raab has claimed the issue of Scottish independence is a “distraction” from the record of the SNP north of the border.

Speaking on the BBC’s Andrew Marr Show, Mr Raab pointed to what he identified as failings of the Scottish Government in education and taxation.

The Foreign Secretary said Scotland would be able to take hold of the benefits of Brexit, although he did not go into what the benefits would be north of the border.

In response to accusations there was no plan for Scotland, Mr Raab said: “I don’t think that’s right, we want to make sure, with the levelling up agenda, with the opportunities of Brexit right across the board, that Scotland’s got the great opportunity to take advantage of all those benefits.

“At the same time, we obviously expect the SNP to deliver on its commitment to honour the outcome of the independence referendum and not keep coming back and asking for a second one.

“But a lot of this is a distraction from the standards in schools, the high level of taxes, that actually the job of the Scottish Government in discharging its responsibility to the Scottish people ought to be focused on.”

This week, First Minister Nicola Sturgeon unveiled proposals for a separate visa system for Scotland, in a bid to ensure the working-age population does not reduce in the coming decades.

The proposals were rejected by Westminster within hours of publication.

Mr Raab questioned the viability of the proposals – which would see migrants apply for a different visa which would only allow them access to Scotland.

He said: “The question will be how can that work in practice? Either it’s unworkable or it would be so draconian, because you’d have to require people in the United Kingdom to stay in one part of the United Kingdom. I think the questions are all on the SNP’s side.”

Meanwhile, shadow chancellor John McDonnell warned the UK Government not to compromise the safety of the union during the ongoing negotiations over Britain’s future relationship with the EU.

He said: “I’ll just say to Boris Johnson and his colleagues – do not do something that will threaten the unity of our country.

“The language that we’ve heard – even just in the last 24 hours – is divisive and is not going to hold the country together.

“If he can’t secure a good deal, it will again encourage others in Scotland to go their own way and I think it would be completely counterproductive for the Scottish people.”

Mr McDonnell said at a show at the Edinburgh Fringe in the summer that his party would not block another referendum – causing consternation within pro-union Scottish Labour.