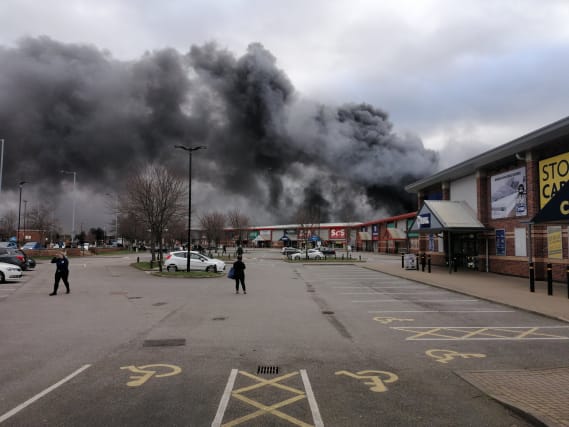 Firefighters are continuing to tackle a large blaze that broke out at a bakery in West Yorkshire.

Eight fire engines remain at the scene of the blaze, which started at Speedibake, on Colinsway, Wakefield, at around 1.17pm on Saturday.

Some roads remain closed on Sunday but evacuated residents were allowed to return to their homes after firefighters confirmed there was no asbestos in the building.

Around 140 firefighters from across the county were brought in on Saturday to tackle the blaze, which created huge plumes of black smoke.

On Sunday, West Yorkshire Fire and Rescue Service said: “Eight fire appliances and two aerial ladder platforms remain at the scene in Wakefield city centre”, adding that the fire was under control.

“Westgate Retail Park is open as usual, with the exception of Mecca Bingo, which will remain closed today.”

Wakefield Council said Chald Lane and part of Colinsway will remain closed “for the foreseeable future” and it was hoping Westgate will reopen later on Sunday. All other roads are open.

Connor Strachan, 19, from Alverthorpe, said around 100 customers of Cineworld and Mecca Bingo, which are both opposite Speedibake, were told to wait in the cinema building on Saturday afternoon.

He said: “We were eventually let out, a lot of the other buildings were evacuated too.

“There was a lot of black smoke, it was quite chaotic.”

Ben Russell, 29, who lives more than two miles away near Trinity Walk shopping centre, said he could see the thick black cloud of smoke from his flat window.

He added: “It’s a huge blaze, smoke is all around the area.”

West Yorkshire Police said there were no reports of any injuries.