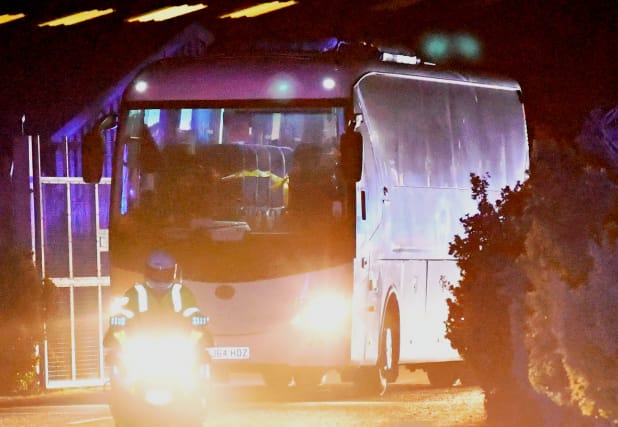 Eleven more evacuees from coronavirus-hit China are beginning a two-week quarantine period after they were flown back to the UK on Sunday evening.

The British nationals and family members arrived at RAF Brize Norton on a flight from France shortly before 8pm and will join 83 people already in isolation at Arrowe Park Hospital in the Wirral.

The latest repatriation flight came as a man in the Philippines became the first person to die from the virus outside China, where the death toll has risen above 300.

Chinese authorities said the number of confirmed cases of infection had increased to 14,380.

A University of York student and their relative remain the only two confirmed cases in the UK and the pair are being treated at a specialist unit in Newcastle.

On Sunday, the Foreign Office, which has withdrawn some staff from China and closed the British Consulate-General in Wuhan, said it is continuing to work with EU countries to add remaining Britons to any rescue flights they may charter back from Wuhan.

A spokesman for the Foreign Office (FCO) said: “The Government is in touch with British nationals who remain in Wuhan, and are doing everything we can to bring them home as safely and quickly as possible.”

Foreign Secretary Dominic Raab said the Government – which has launched a public health campaign advising people how to slow the spread of the virus – is doing all it can to help Britons leave Wuhan.

Mr Raab told the BBC’s Andrew Marr Show: “We’ll do everything we can to make sure that those that still want to leave, give them the opportunity to do so.”

He added: “The challenge that we’ve got, and the Chinese have got frankly, is to contain the virus but also then to lift out people that want to come back home and we’re doing that as sensitively and as effectively as we can.”

The Department of Health said the new campaign of advertisements advising people to use tissues when sneezing or coughing and wash their hands regularly will target publications and forums known to be read by Chinese nationals in the UK.

Health Secretary Matt Hancock said UK medics are working “round the clock” to prevent the spread of the illness, but added the general public can do its bit.

He said: “Basic hygiene such as washing our hands regularly and using tissues when we cough and sneeze can play an important role in minimising the spread of viruses like this.”

The University of York reassured staff and students that the risk there remains low as investigations revealed the unnamed student had not been on campus or in student accommodation either before or after being exposed to the virus.

Vice-chancellor Professor Charlie Jeffery said the student did not attend a university Chinese New Year celebration or recent graduation ceremonies and contacted emergency services as soon as their relative showed symptoms of the virus.

Public Health England is continuing to work to try to trace people who had close contact – defined as being within two metres of the infected person for 15 minutes – with the pair, who had checked in to the Staycity apartment-hotel in York.

A dedicated helpline set up by the University of York at the weekend for people with concerns about the virus had received more than 240 calls by Sunday afternoon.

The UK risk level from coronavirus remains at moderate, having been raised from low last week, on the same day the World Health Organisation (WHO) declared an international public health emergency.

The Department of Health said 266 coronavirus tests had been carried out in the UK to date, with only the two confirmed cases coming back positive.

Many countries have said they plan to quarantine evacuees for two weeks to avoid spread of the virus and evacuation flights out of Wuhan – where the virus was first identified – are expected to continue.

Russia, Mongolia and North Korea have announced that they will close their land borders with China to guard against the spread of the virus.

New Zealand announced on Sunday that it is imposing a temporary 14-day ban on foreign travellers from China.

The Department of Health said it had “no current plans” to stop travellers from entering the UK.

A spokeswoman said: “We have no current plans to restrict entry into the UK, but we will keep this constantly under review and follow WHO guidance.”