Who are the Democratic candidates seeking the party’s presidential nomination? 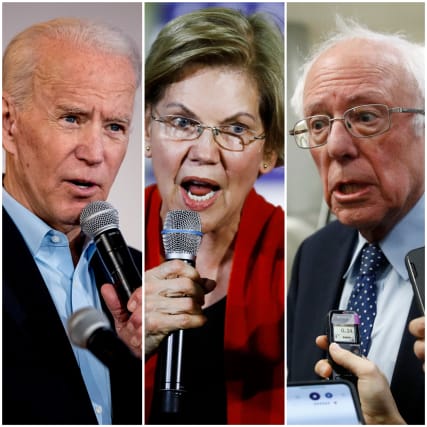 Candidates who have declared for the Democratic nomination and are still campaigning:

– The senator from Colorado hails from a state that was Republican but has increasingly become Democrat-supporting.

He was a member of the bipartisan “Gang of 8” – four Democrats and four Republicans — that introduced a major bill to reform immigration policy in 2013.

– the 77-year-old, whose life has been marked by several personal tragedies, served as vice president to Barack Obama. His experience in foreign policy is unmatched, although his son Hunter’s business links to Ukraine sparked the events that led to Donald Trump’s impeachment inquiry.

Mr Biden defended Obamacare against rival candidates who want a more European-style healthcare system. His rapport with working class voters is seen as an asset in the bid to win back Trump voters and he has based his campaign in his native state Pennsylvania, a battleground.

– The billionaire media mogul is a late entry and money will not be a problem for a man who has proposed gun control measures and suggested he will work with his aides in an open plan office if elected to the White House.

Mr Bloomberg was mayor of New York City from 2002 to 2013. He originally ran as a Republican but left the party mid-way through his second mayoral term and won his third term as an independent. He rejoined the Democrats in 2018.

– The 38-year-old gay former mayor of South Bend, Indiana, is a novice in terms of national politics but has proved a fundraising phenomenon.

The ex-serviceman is often introduced on stage by his husband Chasten and is the first openly LGBT candidate to make a serious pitch for the presidency. He studied as a Rhodes scholar in the UK at Pembroke College, Oxford.

– She has encountered criticism from fellow Democrats for some spirited debate performances including fierce opposition to some US foreign interventions.

The former servicewoman has sparred with Hillary Clinton, and has filed a defamation lawsuit against the former secretary of state over an interview where Mrs Clinton appeared to call Ms Gabbard “the favourite of the Russians”.

– From Minnesota, a “rust belt” state that Mr Trump almost won in 2016 and has vowed to claim in 2020. The former prosecutor is seen as a tough operator.

– the late entrant in the race is a former governor of Massachussetts and civil rights lawyer.

– the 78-year-old put up a spirited campaign for the party’s backing in the last election but eventually finished runner-up to 2016 nominee Mrs Clinton, although tensions with the former first lady played into the hands of Donald Trump.

Mr Sanders is running on a platform with socialist policies including medicare for all and has enjoyed a poll surge in recent weeks.

His older brother Larry is a politician in the UK, having been a Green Party county councillor in Oxfordshire, and standing unsuccessfully as a Westminster candidate several times.

– Another billionaire who does not have funding worries and has been at the forefront of efforts to impeach Mr Trump.

– Born in Oklahoma, she has unveiled several big policy announcements.

Ms Warren has also battled with Mr Sanders for the backing of what is seen as the party’s progressive wing and she accused him of calling her a liar when she claimed he told her a woman could not win the presidency.

The 70-year-old has spurned big donations.

She was nicknamed “Pocahontas” by Mr Trump following her claims of Native American ancestry.

– The candidate, backed by the Yang Gang, is credited with performing well in the Democratic debates but is still polling in single digits. Seen as tech-savvy and in tune with younger votes.