Tributes paid to teenager stabbed to death outside Essex pub 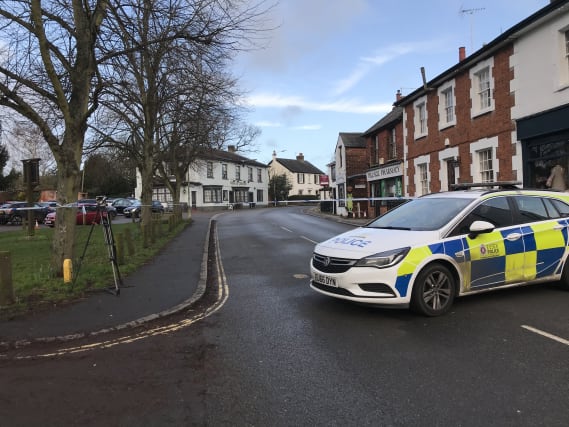 Dozens of people have paid tribute to a "lovely and caring" teenager who was stabbed to death outside an Essex pub.

Officers were called at 8pm on Friday to reports two men had been assaulted outside the Rose and Crown pub in The Green, Writtle.

One of the men, named locally as 19-year-old Liam Taylor, died at the scene, with the other taken to hospital suffering non-life-threatening injuries.

Four men have been arrested on suspicion of murder and remain in custody.

More than 50 people including his mother Michelle Taylor arrived at The Green at around 11am to lay flowers and release balloons in tribute to Mr Taylor.

A procession and prayer was led by a local vicar before well wishers took part in a minute's silence.

Connor Wise, 21, and Georgia Wicks, 19, from the nearby village of Great Baddow, said they received a call from a friend on Friday night about Mr Taylor's death.

Mr Wise, who said he had known Mr Taylor for four years, said: "He was a lovely and caring guy, I would hang out with him in town."

A tearful Miss Wicks, who said she dated Mr Taylor two years ago, added: "It's so shocking, I used to work with his grandmother at St Peter's Hospital in Maldon."

Flowers were placed beneath a tree close to the pub.

One message read: "RIP Liam, you will always be in our hearts, too young to die."

Villagers in the area spoke of their shock after hearing news of the stabbing.

An 85 year old woman, from Lodge Road, who did not want to be named, said serious incidents were rare in Writtle.

"I've lived here for 40 years and nothing like this ever happens," she said. "It's such a quiet place."

Another 81-year-old dog walker, who lives five minutes away from the pub, said: "It's a shame it happened at that lovely little pub, the owners must be devastated."

A police cordon remained at the scene on Saturday morning, with parts of The Green closed to traffic between the pub and St John's Road. The cordon was moved to allow traffic through The Green shortly before 11am.