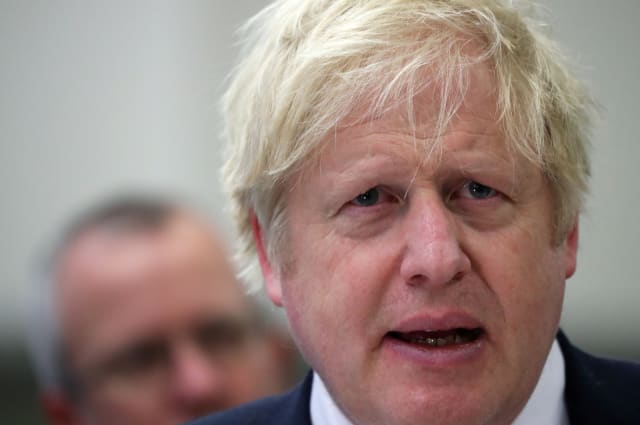 Boris Johnson will tell the European Union he is prepared to accept border checks in a no-deal like scenario as tensions ratcheted up between the sparring sides.

As the dust settles on Britain's formal EU withdrawal on Friday, attention has turned to the impending trade talks as the Prime Minister prepares to lay out his post-Brexit vision on Monday in a speech in London.

The Government is understood to be privately infuriated by what it perceives to be attempts by Brussels to change the terms of the deal struck in October as part of the Withdrawal Agreement.

Reports have surfaced in recent days suggesting EU chiefs want the UK to continue to follow Brussels-made rules on standards and state subsidies, while accepting the jurisdiction of the European Court of Justice (ECJ) over matters relating to any trade deal.

But in what promises to be a combative speech, the PM is expected to tell the EU he will accept no alignment, no jurisdiction of the European courts, and no concessions to any Brussels' demands when talks start in March.

A Government source told the PA news agency that the PM would be prepared to accept a Canada-style free trade deal – a checks-lite trade arrangement that would allow tariff-free trade for the majority of goods, but that would not include the UK's dominant services sector.

Analysis undertaken by the Treasury in 2018 predicted that Britain's economy would be 4.9% worse off under such a deal within 15 years, when compared with expected growth if it had remained in the EU.

If a Canada-esque deal cannot be signed-off, insiders say the Government is gearing up to walk away with what is dubbed an "Australia-style" arrangement – a re-branding of a no-deal Brexit.

It would see the UK revert to World Trade Organisation (WTO) rules, with additional mini-deals tacked-on to ensure travel arrangements, such as international flights, can continue.

A Government source told PA: "There are only two likely outcomes in negotiation – a free trade deal like Canada or a looser arrangement like Australia – and we are happy to pursue both."

European leaders have already set out their own warnings to Mr Johnson over the upcoming talks.

French President Emmanuel Macron used an article in the Times to outline how the level of single market access granted to the UK would "depend on the degree to which the European Union's rules are accepted".

Another area of trouble could be Gibraltar, with Spain reportedly laying down a gauntlet to EU negotiators over the terms of any deal in the offing.

According to the Observer, the EU will back Spain over its territorial claims to the British overseas territory by giving Madrid the power to exclude its population of 34,000 people from any potential trade deal.

In his keynote speech in London on Monday, Mr Johnson is preparing to rule out relaxing rules on workers' rights, food hygiene standards and environmental protections.

He is also expected, according to Government sources, to confirm UK negotiators will pursue free trade agreements with the likes of the United States, Japan, Australia and New Zealand at the same time as dealing with Brussels.

The Sunday Telegraph reported that a trade deal is earmarked to be agreed with Japan by Christmas, followed by more agreements with Australia and New Zealand in mid 2021.

On top of the tough stance on trade, the Sunday Times reported that British diplomats have been ordered to make a break with their former EU allies in a bid to "adopt a stance as a confident independent country".

According to a leaked telegram quoted by the paper, Foreign Secretary Dominic Raab said the UK should be free to "dis-apply EU foreign policy positions" during the 11-month transition period, as Britain prepares to move away from the bloc.

It comes as the Mail on Sunday revealed the PM toasted his Brexit success on Friday evening with a £350 bottle of rare vintage red wine.

The paper said the Conservative Party leader opened a bottle of 1994 Chateau Margaux that was left to him in a supporter's will, gifted with strict instructions for it not to be drunk until Britain was no longer an EU member.

Dominic Cummings, the PM's chief aide and the mastermind behind his "get Brexit done" slogan, is said to have teared-up after the UK's departure was confirmed at 11pm.

Taking to the microphone at a party at Downing Street, the Sunday Times said the Vote Leave strategy guru had to compose himself by clutching a hand over his face, before addressing those in Number 10 for the historic occasion.