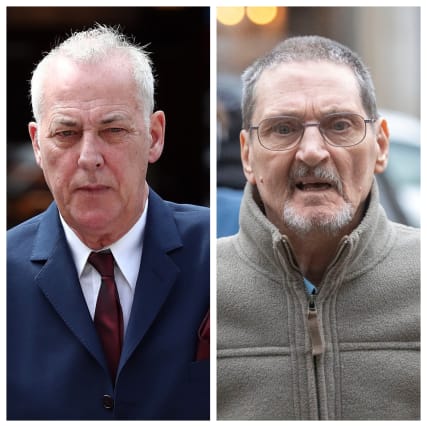 The father of a man found dead in Michael Barrymore’s swimming pool nearly 20 years ago has thanked the entertainer for keeping the case in the public eye.

Terry Lubbock says the TV presenter has helped his fight to get justice for his son Stuart Lubbock enormously.

Mr Lubbock, 74, was speaking to the PA news agency ahead of the broadcast of a Channel 4 documentary about his son’s death at Barrymore’s then-home in Roydon, Essex in March 2001.

He has seen a preview of the documentary – Barrymore: The Body In The Pool, which is due be aired on Channel 4 on Thursday – and says he thinks it will help police investigating his son’s death.

“I’m not well now and I’ve seen the best years of my life,” Mr Lubbock, of Harlow, Essex, said.

“And he has helped me enormously. He’s kept this in the news and I thank him for it.

“I cannot imagine Stuart would still be getting all this attention without Michael Barrymore.”

“But how can you forget your child? I dream about Stuart. To me his death seems like it was weeks ago, not 19 years ago.

“As long as I keep breathing I won’t stop fighting for him. And anyone who had anything to do with what happened to him had better realise that.

Mr Lubbock told the documentary that the fallout has “smothered everything that was good” about his son.

And he said trying to solve the mystery had “consumed” him and left him exhausted.

The new programme charts the police’s investigation into the death, as well as the attempts by entertainer Barrymore to restore his public image following the incident.

Mr Lubbock told the makers of the documentary: “This thing is so big that it smothered everything that was good about my son Stuart. I feel exhausted but it is still in me to carry on.

“How can a father dismiss the questions that have got to be answered about my son’s murder?”

He added: “I hope to God that Stuart was on another planet and that he didn’t feel pain.”

The documentary tells the story of the death through interviews with journalists, forensics experts and people who knew Stuart.

In the programme, DCI Stephen Jennings said that he believes Stuart was “raped and murdered that night” at Barrymore’s Roydon home.

“Somebody at that party knows what happened,” he added.

He said that items from the house including a pool thermometer had gone missing after it was initially searched by police.

Stuart’s brother Kevin Lubbock also told the programme that there was a “wall of silence” surrounding the death.

“I just want to move on and get on with my life,” he said. “Stuart was the best brother in the world, he was everything you could want really.”

At the beginning of the 90-minute programme, the 999 call reporting the incident to police is played.

The caller said: “A fella has drowned in the pool. We have got him out.

“There’s a party going on and someone has just gone out and found him. I think the geezer’s dead mate.”

Last year, Barrymore spoke out about the death, telling Piers Morgan’s ITV show Life Stories that he “couldn’t be more sorry” for his behaviour that night, and that he is “100% innocent”.

The TV star was arrested in 2007 but never charged with any offence. He sued Essex Police and claimed it was a wrongful arrest that had cost him around £2.5 million in lost earnings, but Court of Appeal judges concluded he would be entitled to only “nominal” damages.

Barrymore: The Body In The Pool will be broadcast on Channel 4 on Thursday.