Foreign Office pulls staff out of China after evacuating Britons 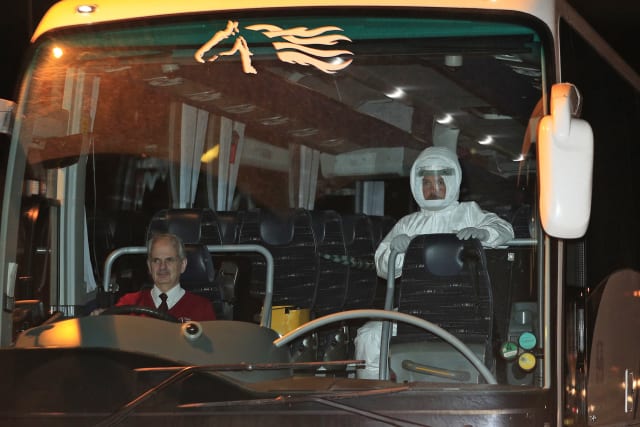 The Foreign Office is withdrawing staff from China just hours after flying dozens of UK nationals home from coronavirus-hit Wuhan.

Essential staff will remain to continue “critical work” but the FCO has warned that its ability to provide help to Britons in the country may be “limited”.

The rescued UK nationals were taken to Arrowe Park Hospital on the Wirral in a convoy of six coaches, arriving shortly after 7.15pm on Friday.

They will spend the next 14 days in quarantine.

The evacuation flight from the Chinese city at the centre of the outbreak carried 83 Britons and 27 non-UK nationals and landed at the Brize Norton RAF base in Oxfordshire at around 1.30pm on Friday.

Their arrival comes as health officials urgently try to trace those who came into contact with two people diagnosed with coronavirus in the UK.

The UK passengers were taken to the Merseyside hospital to be housed in an NHS staff accommodation block with access to the internet.

A medic wearing a white specialist suit sat next to the driver of each coach.

The vehicles were led by a police escort to the rear of the hospital and on to a side road leading to the accommodation block.

Patients disembarked from behind barriers covering the accommodation entrance, but some could be seen inside wearing masks as they walked upstairs to their rooms for the next fortnight.

They are being given fully-furnished rooms, food, and laundry facilities, and have access to a team of medical staff who will closely monitor their condition.

Kitchens are available for those who wish to self-cater, and families are being kept together, with games consoles, toys and cots provided.

The evacuation flight came as the first two cases of coronavirus in the UK were confirmed by Public Health England (PHE).

PHE confirmed that the two people taken ill – who are members of the same family – had been staying at the Staycity apartment-hotel in York when they became unwell.

The firm has said the apartment involved has been thoroughly disinfected and PHE has been providing support.

The two people diagnosed with the virus are being treated by Newcastle upon Tyne Hospitals NHS Foundation Trust in its specialist Airborne High Consequences Infectious Disease Centre (HCID).

“Close contacts will be given health advice about symptoms and emergency contact details to use if they become unwell in the 14 days after contact with the confirmed cases.”

Prof Peacock previously said that, while staff were working to trace people who have been in contact with the pair, they do not currently have “any idea” of how high that number might be.

The PHE definition of close contact is being within two metres of the infected person for 15 minutes.

On Thursday, the UK’s four Chief Medical Officers raised the risk level of the illness from low to moderate and the World Health Organisation (WHO) declared an international public health emergency.

The United States declared a public health emergency on Friday night, with President Donald Trump signing an order which will temporarily bar entry for most foreign nationals who have travelled in China within the last 14 days.

UK ministers said the Government will send another plane to coronavirus-hit Wuhan to rescue British citizens if needed.

The PA news agency understands that the Foreign Office is working with EU countries to add British passengers to any rescue flights they may charter back from Wuhan.

Chinese health officials said early on Saturday that the death toll in the country from the virus had risen to 259, with the number of known cases rising from 9,962 to 11,791.

Many other countries, including Australia, South Korea, Singapore and New Zealand, have said they plan to quarantine evacuees for two weeks to avoid spread of the virus.

Russia, Mongolia and North Korea have also announced that they will close their land borders with China to guard against the spread of the virus.