Union flag removed from outside EU headquarters in Brussels 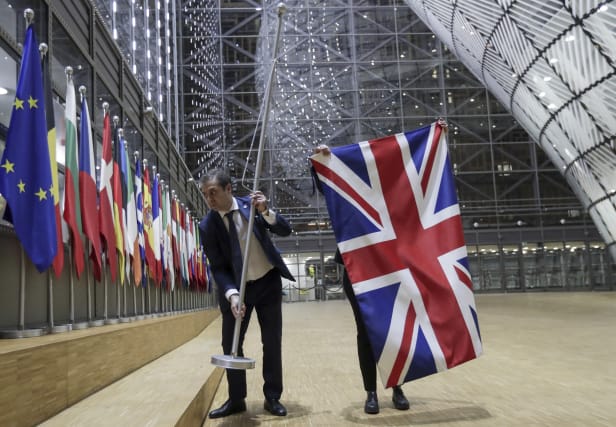 The British flag has been removed from its flagpole outside the European Parliament and replaced with the flag of the EU.

The Union flag was removed at exactly 8pm by parliamentary staff, watched by crowds of journalists and British expats.

Dozens of people had gathered on the pavement outside the parliamentary building from dusk on Friday to witness the last symbol of Britain’s membership of the EU be taken away.

A group of newly redundant assistants to the UK’s MEPs attended sporting their commemorative UK/EU scarves.

There was a small cheer as the lowering mechanism got briefly stuck, with one onlooker joking: “It means you have to Remain.”

It was a three-man job to lower the flag and stop it flying away in the breeze as it was unhooked, before it was neatly folded up.

The flag is due to be placed in the House of European History in Brussels, a spokesman for the European Parliament said.

The British flag from the foyer of the parliament had been removed by mid-afternoon on Friday, while the flag from inside the European Council was also taken down on Friday evening.

The Union flag was also removed from the European Council building in Brussels, where national leaders gather for their regular summit.

Two officials removed the flag from its pole and carefully folded it away.