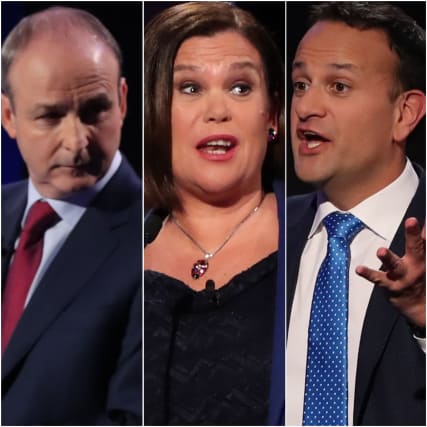 Sinn Fein’s border poll pre-condition for entering government is not an exotic red line but an absolute necessity, Mary Lou McDonald has said.

The party president made clear that she would only be part of an Irish government that is committed to pushing for a referendum on unity and laying the groundwork for a debate on constitutional change.

Both Fine Gael and Fianna Fail continue to rule out Sinn Fein as potential junior partners in government.

While the power for calling a vote on the constitutional future of Northern Ireland rests with the UK government, Ms McDonald believes the next Irish government should advocate for a referendum.

On a visit to the Armagh/Louth border hours before the UK left the EU, Ms McDonald was asked how red her red line was.

“It’s a necessity,” she replied.

“I have said very clearly that I believe that we should have a border poll within the next five years and more importantly that preparations for constitutional change need to start.

“This shouldn’t be written up as some sort of exotic red line for Sinn Fein, this is an absolute necessity.

“And I have to tell you I cannot understand political leaders or political parties who refuse to see what is in plain sight, and that is that change is happening.

“And I think responsible leaders, responsible politics plans for that, engages with that.

“You don’t bury your head in the sand and pretend that change isn’t happening – it is happening.

“This needs to be done and it needs to start now.”

Asked whether the constitutional question was really resonating as a campaign issue for voters ahead of the General Election, Ms McDonald insisted it was being raised on the doorsteps.

“I think people are very keenly aware that things are changing, that Brexit has accelerated the conversation on Irish unity and increasingly I have a sense that people want to be part of that conversation,” she said.

The republican leader said young people in particular were “excited” by the prospect of unity and saw it as the opportunity to “fix things that are broken” in Irish society.