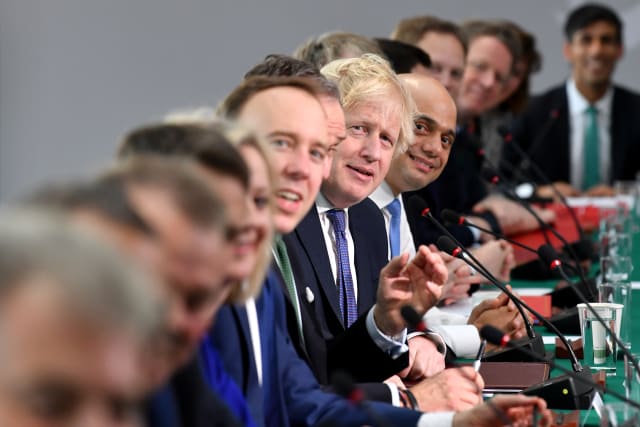 The Prime Minister has set himself the ambitious target of ensuring more than three-quarters of UK trade is covered by free-trade agreements within three years of Brexit.

Boris Johnson told Cabinet ministers in a meeting in Sunderland that a “new chapter in the United Kingdom’s story” would start after 11pm – the official moment of the country’s departure from the European Union.

And in an indication of the Conservative Party leader’s visions for the UK’s future on the eve of its EU exit, he told his close circle of ministers that he wanted 80% of UK trade to be covered by free-trade arrangements by 2023.

In a symbolic move, Mr Johnson chose to chair the Cabinet meeting in Sunderland, the city which was the first to back Brexit when results were announced after the 2016 referendum.

Car manufacturing giant Nissan, Sunderland’s largest employer, providing 7,000 jobs at its Wearside factory, used the opportunity to call for “clarity” on what the trading relationship with the EU will “look like”.

“From tomorrow, the UK will also be free to begin trade negotiations with countries around the world – with the aim to have 80% of our trade covered by FTAs within three years.”

As an EU member, Britain was not able to strike trade deals of its own accord, but instead delegated responsibility to Brussels.

Mr Johnson said delivering on his “get Brexit done” pledge would now allow him to focus on his domestic priorities and “levelling up” the nation’s regions.

“The Prime Minister began by saying that, today, we start a new chapter in the United Kingdom’s story, turning a page on the division of the last three-and-a-half years and going full steam ahead to bring the nation together and level up opportunity for everyone, right across the country,” added the Number 10 spokesman.

He also used the meeting to thank outgoing Brexit Secretary Stephen Barclay for his “fantastic work”, as he prepares to go back to being a backbench MP.

Mr Barclay’s department, the Department for Exiting the European Union (Dexeu), is being disbanded once Britain’s divorce from Brussels is finalised.

While Mr Johnson talked up the UK’s prospects if it seals a Canada-style free trade deal, European leaders warned that Britain faces a more distant relationship with Brussels if it insists on leaving the EU’s regulatory orbit.

European Commission president Ursula von der Leyen said relations with the UK would never be as close once it is outside the EU.

“We want to have the best possible relationship with the United Kingdom, but it will never be as good as membership,” she said.

Earlier, in a BBC interview, she made clear the EU would battle to protect the integrity of the single market in the negotiations.

Her comments reflect a determination to prevent the UK undermining EU rules and regulations through undercutting.

“We are moving further away from the orbit of EU rules and laws,” he told the BBC.

A Number 10 spokesman added: “You can only have fully frictionless trade if you accept their rules. We have been clear we will not be doing so.”

And in what Number 10 billed as an “address to the nation”, to be released an hour before the moment the UK leaves the EU, the Prime Minister will promise to heal the bitter divisions opened up by Brexit.

“It is a moment of real national renewal and change.”

As Brexiteers prepare to celebrate the UK’s withdrawal at the stroke of 11pm on Friday, in European capitals there was sadness at the breaking of a bond dating back 47 years.

Mr Johnson will spend the evening in Number 10 hosting a celebratory reception for senior ministers, officials, and supporters of the 2016 referendum campaign to leave the EU.

Brexiteers will gather for a party in Parliament Square led by Nigel Farage, while Union flags are already flying around Westminster.

In official events, Downing Street will be illuminated with a light show while a new commemorative 50p coin is entering circulation.

In Northern Ireland, the campaign group Border Communities Against Brexit was staging a series of protests in Armagh, near to the border with the Republic of Ireland.