Nicola Sturgeon insists Brexit will lead to an independent Scotland 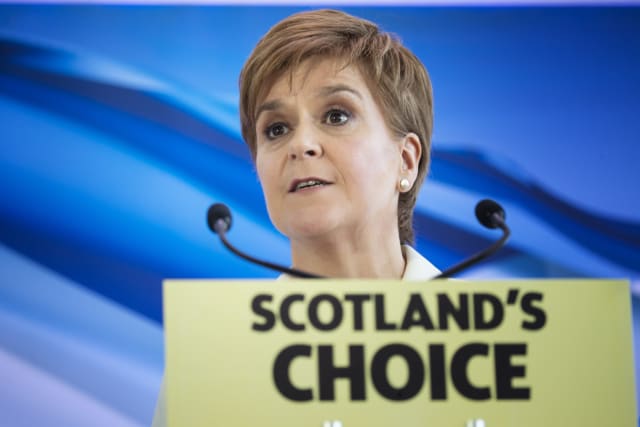 Nicola Sturgeon has insisted her bid to hold a second independence referendum in 2020 is “perfectly realistic”, as she predicted Brexit will lead to the break-up of the United Kingdom.

Just hours before the UK formally leaves the European Union, the Scottish First Minister used a speech in Edinburgh to unveil new measures as part of a push towards an independent Scotland.

The SNP campaign budget will be doubled this year in a bid to woo undecided voters into backing independence, while the Scottish Government will publish a series of papers setting out how Scots can “build a better future” outside the UK.

Watchdogs at the Electoral Commission will be tasked with testing the question “Should Scotland be an independent country?” – the one which was used in the 2014 vote – in preparation for a second ballot.

Ms Sturgeon also promised a new Constitutional Convention, following on from the one which campaigned for the creation of the Scottish Parliament, to make the case for Scotland, and not Westminster, to have the right to determine when another referendum should be held.

After Boris Johnson rejected her call for the powers needed to hold another vote to be transferred to Holyrood, Ms Sturgeon warned: “The Tories are not governing Scotland – they are goading Scotland.”

She claimed it is the Tories’ “fear” of the verdict of Scottish voters that is behind the decision to block a second referendum.

Earlier this week, Holyrood voted in favour of holding a second independence referendum, while an opinion poll published on Thursday showed 51% of Scots now support leaving the UK.

Ms Sturgeon insisted she will not sanction a “wildcat” unauthorised referendum, as was held in Catalonia, but she said there could come a time when the Scottish Government will consider holding a consultative vote – if this was ruled to be legal by the courts.

Although she claimed it is “entirely possible to have a referendum this year”, she also told independence supporters that they must be prepared to “stay the course, even if sometimes it feels difficult”.

Some in the SNP, including former justice secretary Kenny MacAskill, have previously voiced doubt over whether a ballot can take place before the end of 2020.

But Ms Sturgeon insisted it is “perfectly realistic”.

She added: “I believe a referendum is practical this year, I believe it can be delivered this year, and I will continue to do all I can to bring that about.”

Speaking at a “pivotal moment” as the UK departs the EU, she made it clear Scotland has a choice for its future.

Ms Sturgeon said: “What this is for Scotland is a moment of understanding and recognition that there is a fork in the road.

“Boris Johnson’s path lies one way, the opportunity to be a modern, progressive, open, tolerant country at the heart of Europe lies the other. That other way can only come with independence.

“I believe Brexit will lead to Scotland being independent. In that sense the UK in its current form will not exist.

But Scottish Conservative interim leader Jackson Carlaw condemned the “downbeat” statement from a First Minister “faced with the reality that there will be no referendum anytime soon”.

He added: “Nicola Sturgeon’s determination to plough on with preparations for another vote on independence is predictable, depressing and entirely wrong-headed.

“People across Scotland are sick and tired of her relentless pursuit of a referendum they simply don’t want.

“What people do want is action now to improve education, health, policing and all the other services they rely upon.

“On the day we leave the EU, they want a Government which focuses on Scotland’s economy and jobs.

“And they want Nicola Sturgeon to put her referendum plans where they belong – firmly on the backburner.”

She added: “It is sickening that Nicola Sturgeon is willing to neglect struggling schools and hospitals and waste even more public money on her never-ending campaign to divide the people of Scotland.”