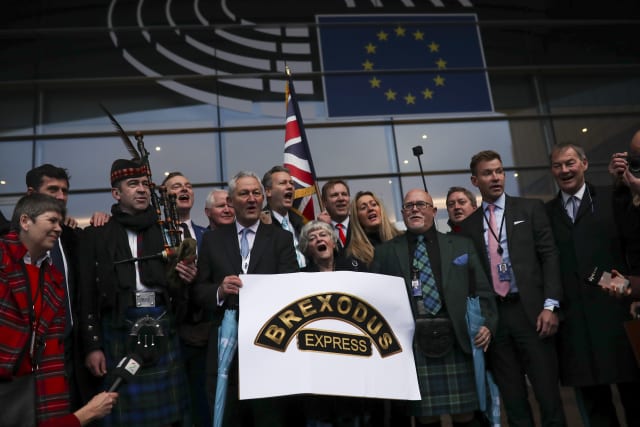 Brexit Party MEPs staged a parade in Brussels as they walked out of the European Parliament for the final time, led by a bagpiper.

Ben Buckland headed the procession around the Place du Luxembourg, followed by Ann Widdecombe in a taxi decorated with a Union flag.

A number of others, including June Mummery and Belinda De Lucy, followed on foot.

It marked one last stunt in a raucous final week for the party – which saw Nigel Farage get a telling-off in his last speech to the chamber for decorating his desk with miniature British flags.

The Brexit Party leader left the European Parliament on Wednesday evening with We Gotta Get Outta This Place by the Animals blasting out on loudspeakers.

Ms Widdecombe, a former shadow home secretary during her 23 years as a Conservative MP, had little sympathy for those grieving the loss of their status as an EU citizen.

She added: “I would have been very sad if we had lost. But that is democracy, that is what it means. Somebody wins, somebody loses.”

She went on: “I am tired of hearing this nonsense being talked that young people are going to be deprived of their rights to travel and to study in other countries.

“I’m old enough to remember the days before we joined – we travelled, we studied, we lived, we worked in each other’s countries all the time, and that’s how it will be again.”

A member of the French press provoked an argument by pointing out to Mr Buckland – who was dressed in a kilt, sporran and beret – that he was English, not Scottish, and that Scotland voted to remain.

Mr Buckland replied: “Obviously, you don’t know the story about the ballot boxes.

“There was a referendum to see whether Scotland wanted to remain part of the UK and the vast majority voted to remain. Fact.

Mr Buckland declined to say whether or not he was Scottish.

Ms Widdecombe said the majority of the Brexit Party’s MEPs would be spending Friday night in Parliament Square where a recording of Big Ben’s bongs will be played at the stroke of 11pm.