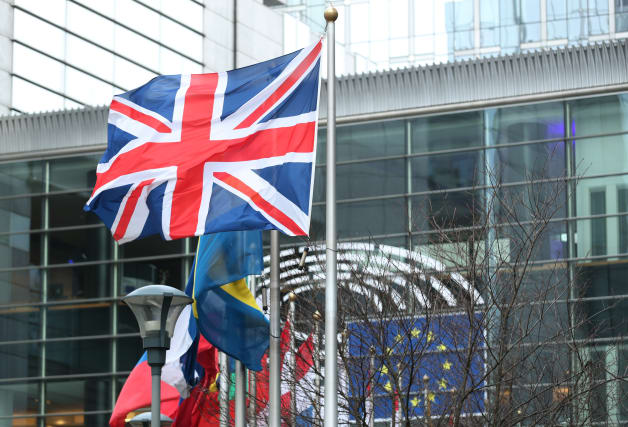 There was a “moving day” feel in the European Parliament on the final day of the UK’s membership of the EU as staff and MEPs lugged the last of their boxes out of the building.

The names of the UK’s delegation were still mostly on their former pigeon holes, although some tags – including Nigel Farage’s – had been taken by souvenir hunters.

Outside the parliament building several tourists posed next to the Union flag which is still flying and is likely to be taken down at dusk on Friday.

Inside, one kindly staff member was handing out chocolates to anyone she heard with a British accent.

Further afield, the Brussels transport company STIB-MIVB tweeted a video of all the metro stations named after British places or historical figures, including Liverpool, Churchill, Dover and Montgomery.

The video finished with the words “Mind the gap when leaving”.

The Brexit Party marked the achievement of their only goal by staging a “Brexodus” at 9am on Friday featuring a bagpiper leading a procession of their MEPs towards the Eurostar.

Ann Widdecombe was chauffeured through Place du Luxembourg in a taxi decorated with British flags while the remainder followed on foot holding party-branded umbrellas.

They plan to be in Parliament Square, London, for the stroke of 11pm on Friday when a recording of Big Ben’s bongs will sound.

It was the final stunt of the week for the party – which saw their leader get a telling off in his last speech to the chamber on Wednesday for decorating his desk with miniature British flags.

Mr Farage left the parliament later that evening to the sound of We Gotta Get Outta This Place by The Animals blasting on loudspeakers.

Ms Widdecombe was unsympathetic towards those grieving the loss of their status as an EU citizen.

Emotions were running high elsewhere as Remain-supporting MEPs and their staff prepared for life after Brexit.

Although there were some tears on the night of the Withdrawal Agreement, by Thursday night Remainers seemed determined to make the best of it.

Those who did not fancy a night in the cold threw a ceilidh in a pub close to the European Commission.

Despite the show of good cheer, many Green MEPs could not hide their anger at being shut out of their main sphere of influence.

She added: “Here in the European Parliament it’s proportional and you get a different type of politics – you’re looking for common ground and engaging in proper dialogue rather than a dialogue of the deaf we have in Westminster.”

Elsewhere, the mayor of Brussels arranged for the city’s Grand-Place to be lit up in the red, white and blue of the Union flag while a band played English rock and folk songs in the square.

Philippe Close set up the event to promote the ongoing ties between Brussels and the UK.