Irish border communities ‘struggling to get mortgages due to Brexit’ 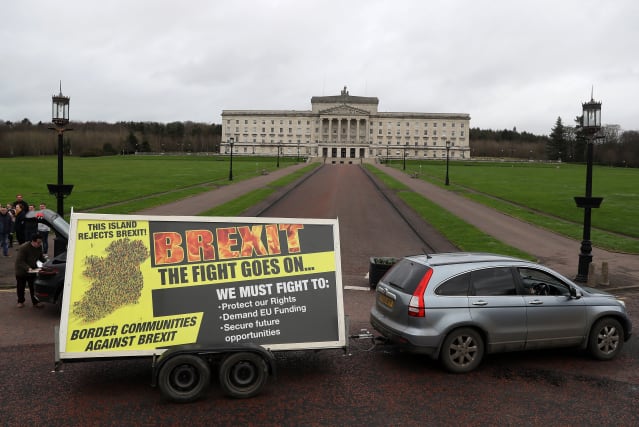 People living one side of the Irish border but working on the other are having “serious” issues arranging mortgages and insurance because of Brexit, campaigners said.

They urged the renewed powersharing administration to exert influence to protect communities living along the frontier with the EU.

Spokesman Declan Fearon said: “People who live on the northern side of the border who are losing those rights should be represented in Europe and at the moment we are not.”

The campaigners met the pro-Remain parties at Stormont and said they would push for a united front going forward.

He said they should have “advisory” MEPs representing Northern Ireland to replace the three MEPs leaving Brussels.

He added: “We certainly don’t feel any joy, it is a sad day for the communities who live and work, especially for people in our community who live on one side of the border and work on the other and there are so, so many.

“At the minute, they are having serious issues trying to get mortgages and insurances.

“We are certainly not rejoicing in this Brexit.”

He said he was happy that there is no hardening of the border, although fearful that that may happen as the end of the year comes.

Another campaigner, Damien McGenity, said lack of representation in Brussels would be a problem when they were seeking funds for border areas.

He said Stormont assembly members should have proper feed into the trade negotiations.

He added: “We could have a no deal at the end of this year, it is still very much on the horizon.

“Our campaign will be about explaining to people here that Brexit is not done, it is not resolved.

“Yes we are leaving the EU tonight, we are not happy about that, but we could be  looking at a no-deal in November this year.

“People need to really understand that.”