Heartbroken father ‘will build snowmen’ in his murdered children’s memory 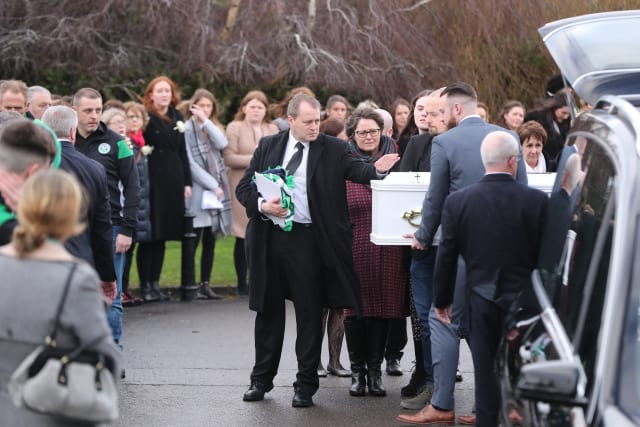 The father of three murdered children has said he now knows what heartbreak really means.

The bodies of Conor, nine, Darragh, seven, and Carla McGinley, three, were discovered lifeless at their west Dublin home a week ago.

Their mother has been charged with their murders.

On Friday the youngsters were carried in little white coffins for a funeral Mass.

Their father paused to touch one of the wooden boxes on his way into the Church of the Holy Family in Rathcoole.

Andrew McGinley said: “We often misuse words. When Ireland would lose a match, I used to say I was heartbroken.

“I now know what that really means.

“We, as a family, are heartbroken.”

He added: “Although we are in a House of God, no God should allow this to happen.”

Rathcoole Boys Football Club provided a guard of honour outside in recognition of Conor and Darragh’s love for the sport.

Mr McGinley said the club was a huge part of their lives.

“I have promises that I have to keep and this will drive me on.

“I promised Carla a snowman, the place will be filled with snowmen every time it snows.”

He paid tribute to his “creative, funny and unique” children.

“It will only be with your help, support and friendship that we will be able to patch our hearts together in some way but we will still be forever heartbroken.

Following their discovery a week ago Irish police launched a murder investigation.

Mr McGinley name-checked the various influences on his children’s lives, from the rock band Foo Fighters and the fantasy film Frozen to Lego which fuelled their creativity.

Everlong by the Foo Fighters was played towards the end of the Mass.

Mr McGinley said: “Thank you to whoever invented trampolines.

“You will never know the fun and enjoyment ours has brought Conor, Darragh and Carla.”

Their father said recent days had been hugely emotional.

He told mourners: “Many of you will never know, until now, how much your everyday actions helped make my children’s lives more wonderful and helped us to allow Conor, Darragh and Carla to grow as the creative, funny and unique kids that they are.”

A priest articulated the “sense of bewilderment, loss and heart-wrenching grief”.

Father Kevin Doherty said: “Their very going from us has left a chasm of absence in our lives.