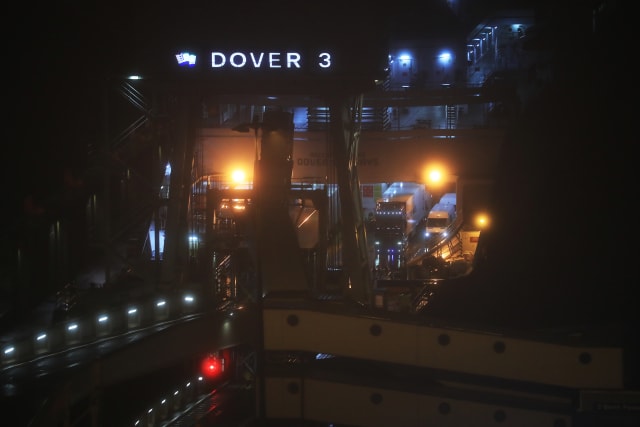 The first ferry from Calais to arrive in post-Brexit Britain has docked at the Port of Dover.

French-registered Cotes des Dunes sailed from France earlier on Friday evening, while the UK was still a member of the EU.

The DFDS passenger ship left the continent about 10.15pm UK time and arrived at the Kent port at about 11.45pm.

Travellers arriving at Dover after 11pm are being given commemorative badges reading: “I travelled through Dover after Brexit.”

The P&O ship, Spirit of Britain, which left Calais at around 11.50pm local time, was the last cross-Channel boat to leave Calais for Dover before Britain left the EU.

Shortly before that, the Pride of Canterbury P&O craft also departed, heading for the White Cliffs.

All of the ferries had to contend with rain and high winds as they set off from France, with similar conditions gripping the foggy English coast.

Despite uncertainty over Brexit over the last few years, staff at the Port of Dover expect business as usual in 2020.

Chief executive Doug Bannister told the PA news agency there was a “bit of relief” among traders that a no-deal Brexit had been avoided.

He said: “Many people spent a lot of time during the last 12 months getting prepared for a no-deal Brexit.

“Through that we all learned a lot about what was required to trade successfully in a post-Brexit era.”

Earlier on Friday, a love letter to the EU from two Second World War veterans, Stephen Goodall and Sidney “Sid” Daw, was projected onto the cliffs at Dover.

In a film arranged by activist group Led by Donkeys, the pair lamented the UK’s imminent departure from the EU in an emotional video in which they talked about their hopes of a return one day.

After the touching words from the two veterans, the video ended with the stars on the EU flag slowly disappearing.

With just one star remaining, the line read: “This is our star. Look after it for us.”