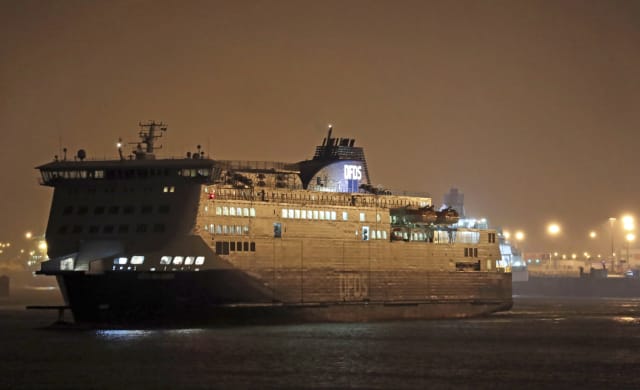 The first Calais to Dover cross-Channel ferries due to arrive in post-Brexit Britain have departed from the French port.

The three boats – the first DFDS, and the others P&O – left Calais while Britain was still a member of the EU, but will arrive after the departure time of 11pm GMT.

The DFDS craft, named Cotes des Dunes, will be the first Calais to Dover vessel to arrive in Kent after the UK has left the bloc.

It left France at around 11:15pm local time, and will arrive in the UK around 90 minutes later.

The P&O ship, Spirit of Britain, which left Calais at around 11:50pm local time, was the last cross-Channel boat to leave Calais for Dover before Britain left the EU.

Shortly before that, the Pride of Canterbury P&O craft also departed, heading for the White Cliffs.

All of the boats had to contend with rain and high winds as they set off on Friday, with bad weather also predicted around the English coast.

Their arrival in Kent will come less than one day after a love letter to the EU from two Second World War veterans, Stephen Goodall and Sidney “Sid” Daw, was projected onto the cliffs at Dover.

In a film arranged by activist group Led by Donkeys, the pair lamented the UK’s imminent departure from the EU in an emotional video in which they talked about their hopes of a return one day.

After the touching words from the two veterans, the video ended with the stars on the EU flag slowly disappearing.

With just one star remaining, the line read: “This is our star. Look after it for us.”