Coaches collecting passengers from evacuation flight to be ‘deep cleaned’ 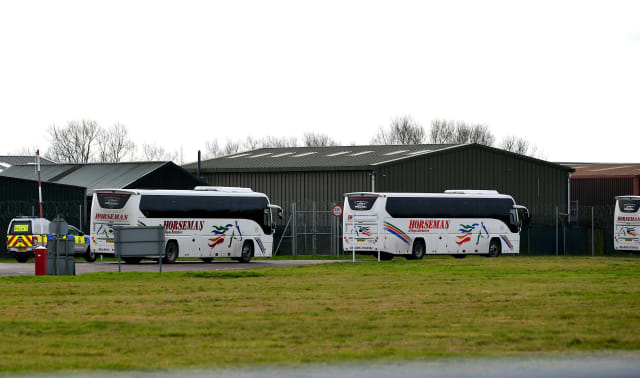 The coach company collecting British passengers arriving on the evacuation flight out of coronavirus-hit China said its vehicles will be “deep cleaned” afterwards.

At least seven coaches from Horseman Coaches Ltd were seen arriving at the Brize Norton RAF base in Oxfordshire at around 10am.

The coach drivers had agreed to take the job, a company spokesman said, but he refused to say whether they would also face being quarantined.

After several delays, the evacuation flight left Wuhan at 9.45am local time on Friday, carrying 83 Britons and 27 non-UK nationals, mostly from EU countries, and is expected to arrive at Brize Norton at around 1pm.

The Horseman Coaches spokesman told the PA news agency: “The Department for Health have procedures in place for the vehicles to be deep cleaned.

“That is part of the process of this undertaking, which will happen as soon as the vehicles are clear.”

He added: “I can give everybody assurance that everything will be cleansed sufficiently.”

The British passengers on the evacuation flight – who have mainly been in Wuhan and the surrounding Hubei province – had to sign a contract agreeing to isolation before they could board the flight, and underwent temperature checks.

On arrival, they will board the coaches and face the more than three-hour drive to Arrowe Park Hospital on the Wirral for a quarantine period of 14 days, where they will be housed in an NHS staff accommodation block with access to the internet.

The spokesman declined to comment on whether or not the drivers – staff members of Horseman Coaches – would also have to be put in isolation.

“I can’t comment any further on that I’m afraid,” he said.

Asked more about the drivers, the spokesman said: “Every driver was given the choice whether to undertake the hire or not, and every single one of them opted to do the hire. It was something they wanted to do.”

Horseman Coaches is a private coach hire company operating throughout Reading, Wokingham, Bracknell, Maidenhead, Slough, West Berkshire and across the south east carrying more than 9,000 passengers each day, according to the company’s website.

The website says the company, which has a fleet of 60 coaches, was named UK Coach Operator of the Year 2019.