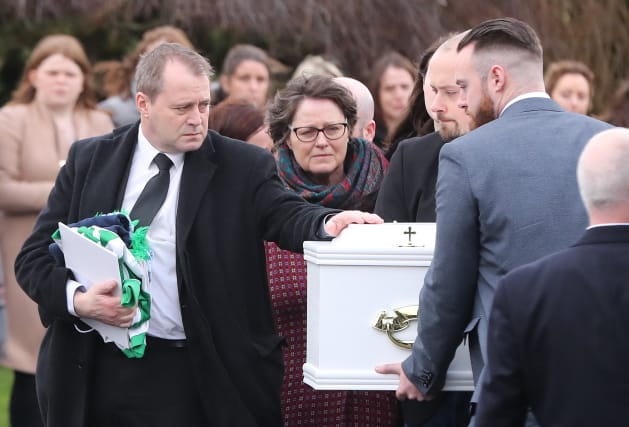 A shroud of darkness has descended on the Irish community where three young children were found dead, a priest told funeral mourners.

The bodies of Conor, nine, Darragh, seven, and Carla McGinley, three, were discovered lifeless at their west Dublin home a week ago.

Their mother has been charged with their murder.

Three tiny white coffins were carried into the Church of The Holy Family, Rathcoole, on Friday.

Rathcoole Boys Football Club provided a guard of honour outside in recognition of the boys’ love for the sport.

Father Kevin Doherty said: “Their very going from us has left a chasm of absence in our lives.

“This darkness has come into our communities, in Newcastle and in Rathcoole.”

A funeral notice described them as “cherished children” who are “sorrowfully missed by everyone”.

She appeared before Dublin District Court at the Criminal Courts of Justice on Wednesday evening and was remanded in custody until next Wednesday.

Fr Doherty said: “This darkness has come to our homes, to our families, to parents. And it has come to each one of us, personally.

“And so, the absence of these three beautiful children cries out to us. It cries out into the sheer darkness of bewilderment and loss that surrounds us.

“And, as it cries out, it brings with it, into our lives, the deepest of pain and heart-wrenching grief.”

He said the light of their beautiful lives shone like the brightest of stars in the lives of so many.

“This is the love that does not come to an end. It finds its way home to heaven.”