Celebrating crowds get the Brexit party started at Westminster 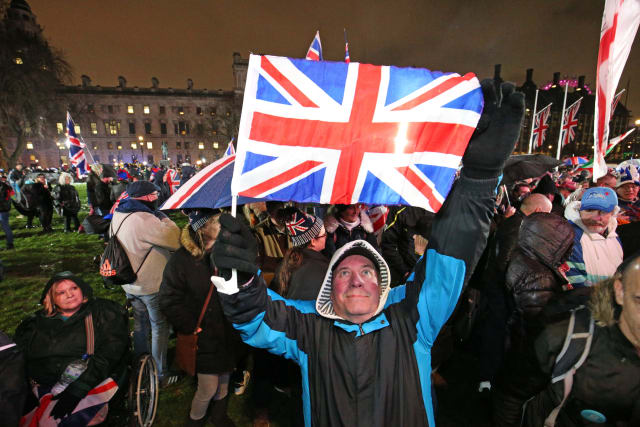 Hundreds of people gathered at Westminster for a Brexit celebration to mark the UK leaving the European Union.

A music system was set up on the back of a lorry on Parliament Street, with people dancing in a closed-off section of the road to music by Sir Tom Jones and Queen.

As one man walked through the crowd with an EU flag draped over his shoulders, another man carrying the Union Flag shouted at him: "Go away loser."

Dozens of people gathered around the Sir Winston Churchill statue, while others rang bells and banged a drum attached to a modified cart called Little Ben.

The cart belongs to David and Nancy Waller, who travelled from Shropshire to take part in the Brexit Celebration.

Mr Waller, 59, said the cart cost about £500 to restore and build, thanks to a "Brexiteer" blacksmith who donated his services free.

He said the bell, which people have been ringing throughout the evening, was found in a salvage yard but was originally forged at the Whitechapel Bell Foundry in London.

Mr Waller said: "We have come here because we are great supporters of democracy. At one stage we thought it was all over, but it ain't now."

Among the crowds were a group of French nationals who said they were jealous of Britain.

Speaking to the PA news agency, Michelle, 54, who declined to give her last name said "France does not have the guts to do this."

France is full of conflict with riots every Saturday between the police and the people but the government are not doing anything, she added.

Asked if she supported Britain's choice to leave, she said: "Yes, I am so jealous and I am here 100% backing them."

Donna Jones said she believes Prime Minister Boris Johnson has "tried his best" and delivered "what's best for the country".

The 44-year-old from west London said she was there to "be part of history".

She added: "I think it's a good thing for Britain, I think we need to get our own laws back and I believe we have got the ability to do it.

"It doesn't mean we're anti-Europe, it just means we want to be self-sufficient in a certain way."

Asked how she thinks EU nationals living in Britain would react, she said: "They might take it (Brexit) the wrong way because we have a certain group in England that is racist, they have got problems with the immigration but I don't want them to think we are leaving because of them.

"We're leaving because of the laws and the trade but we're still their allies."

Logan Rossiter, 17, from the Plymouth Brexit Party, said the gathering was not a "political one" but a celebration of democracy.

"This is what the people voted for, 48% did vote Remain and we are not neglecting them but what we really want to do is unite the nation together under one banner of democracy," he said.