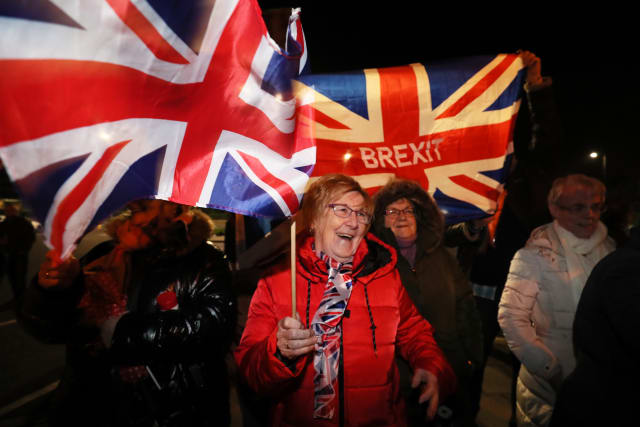 The moment the UK officially left the EU was marked with cheers and the singing of God Save The Queen at the gates of Northern Ireland’s seat of government.

Crowds started gathering from 10.30pm in preparation to hear the distinctive sound of a Lambeg drum being played.

DUP MLA Jim Wells led a countdown from 10 to 11pm before shouting “freedom” to cheers and the waving of union flags and sparklers at Stormont’s front gates.

A piper then played to mark the moment.

The event, billed as a thanksgiving, was opened with a prayer before speakers including Mr Wells and independent unionist councillor Henry Reilly addressed those assembled.

“This is a happy day for our nation, this means that our nation of the United Kingdom of Great Britain and Northern Ireland moves out from the bondage of Europe to the freedom of the rest of the world,” Mr Wells said.

“We have an economy that is bigger than Russia, that is bigger than India, we are the fifth largest trading nation in the world and therefore we have a wonderful opportunity as a nation to go out and to trade and to prosper and I am confident that we will do so.

“The people who are telling us tonight represents a major disaster were the same people that told us 14 years ago that if we didn’t join the euro the British economy would collapse, well how wrong were they because had we had joined the euro, then we during the recession would have been in a disastrous situation.”

Mr Reilly thanked the organisers of the event.

“It was done at such late notice and only for them there would be nothing in Northern Ireland to commemorate and acknowledge this tremendous act of regaining our national sovereignty from the Charlemagne empire in Brussels,” he said.