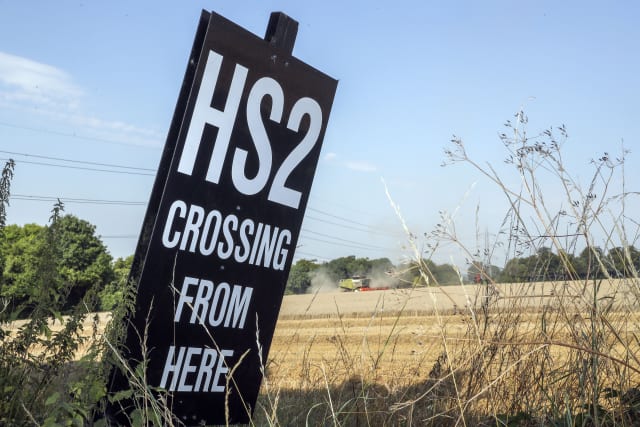 Boris Johnson has said the Government must “keep digging” on HS2, in an indication he could be about to give the controversial rail project the go-ahead.

There have been calls from Conservative MPs to scrap the high-speed line linking London to the Midlands and the North after costs ballooned, with some predicting the final price tag could rise to more than £100 billion.

But in an interview with Sky News, the Prime Minister said that, while the project was a “mess”, ministers would have to “keep digging”.

“It’s a colossal railway line. Now the truth is, the people who did it spent far too much money, they were profligate with the way they did it.

“They just wasted money,” he told FYI, a news programme for children on Sky News.

“And the whole way it was managed was hopeless. So we’re in a hole, we’re in a mess. But we’ve got to get out of it.

“And we need a way forward, so we’re thinking about how to sort it out now.

“In a hole the size of HS2, the only thing to do is keep digging.”

It comes after Chancellor Sajid Javid looked to have thrown his weight behind the high speed line, which advocates say would provide much-needed capacity on Britain’s railways.

Mr Javid met with the PM and Transport Secretary Grant Shapps on Thursday, with those close to the Chancellor suggesting he was minded to back the scheme.

The PA news agency understands that, having reviewed costs and alternatives, the Chancellor, who represents a Midlands constituency, was set to “broadly back” the high-speed line from London to Birmingham, Manchester and Leeds.

Speaking before the meeting, Downing Street declined to rule out that Mr Johnson could overrule Mr Javid on the infrastructure project.

But Mr Johnson appears to be softening on his resolve following his most recent comments, with some £8 billion already spent on the scheme.

Mr Johnson has emphasised “levelling up” the regions through upgrades in infrastructure and HS2 supporters, such as former chancellor George Osborne, have said it would be “nuts” to cancel Europe’s largest planned infrastructure project.