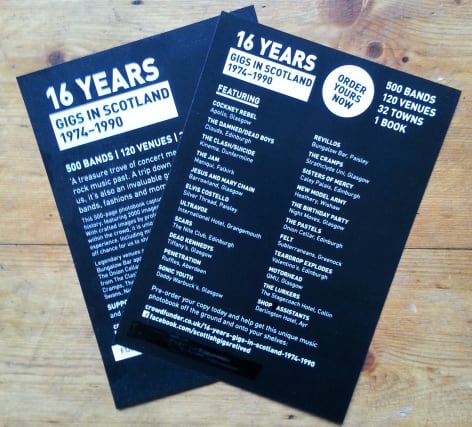 A crowdfunder to publish a book marking an era of live music in Scotland is close to hitting its final £4,000 target.

Chris Brickley came up with the idea for “16 Years: Gigs In Scotland 1974-1990” after collating some of his own concert pictures, ticket stubs and posters.

Over two years, he found enough material for a 500-page book and raised £14,000 through donations and co-sponsors.

The crowdfunder for the final £4,000 needed to ensure publication has almost hit its target ahead of the February 9 deadline.

Speaking to the PA news agency, Mr Brickley told how he focused on that particular era not just because of his own love of the music from that period, but also due to the availability of photographs from gigs.

He said: “I am interested in images and pictures and I felt I was too young for punk and I thought wouldn’t it be great to know what the atmosphere was like at these gigs.

“Quite early on I got a cracking group of punk period photographs, which is like the holy grail because nobody really took cameras to these things.

“It’s not like now when everybody photographs everything. Back then a lot of venues didn’t let you take cameras in, they would take them off you.

“If it was Tiffany’s in Glasgow, or the Apollo for example, it was hard and risky to do. It’s very hard to take photographs in a big venue like those places anyway – you really need to know what you’re doing.

“I thought it was enough to hang this (idea) on and I’ve just kept it going.”

Bands and artists featured include David Bowie, The Clash, Motorhead, Ultravox and the Sex Pistols – who only made one appearance in Scotland – with venues ranging far and wide.

As well as covering musicians, the book includes photographs of the fans – highlighting the hair and fashion trends of the years – with pictures, tickets, posters and autographs.

Mr Brickley said: “Everybody knows about the big venues but I became interested when you discover that really good bands that I like played in wee villages outside Dumfries or Stirling or Bannockburn or Falkirk or Grangemouth.

“That’s the real story because most of these venues have now gone. You can never do something like this and be exhaustive.

“I’m from Glasgow originally, most of my gig-going was there, but I’ve lived in Edinburgh for 20 years so got quite a good handle on being here. I went to a lot of gigs in Dundee and suddenly you want to do much of the country because that is the story.

“It is an ambitious thing but you’re right, if it comes out I think there’ll be a lot of interest in it one way or another, I think it’ll sell fine and you would want to aim for a second edition.

“You could do a really good series of them – particularly looking down south at Manchester and Liverpool.

“It wouldn’t be me doing it but everyone’s saying what a good idea it is.”

Once the crowdfunding target has been hit, Mr Brickley estimates it will take up to four months for the book to be published, before the “fun part” of hosting promotional events begins.

But he added: “The real excitement for me is the stuff that’s going to be lost if we don’t do this project, the stuff sitting in people’s garages and shoe boxes or an album.

“Unless you know what it is, where it was and somebody who knows what they’re doing looks at it, the stuff’s just disappearing.

“That was the motivation and it’s coming together really well.”