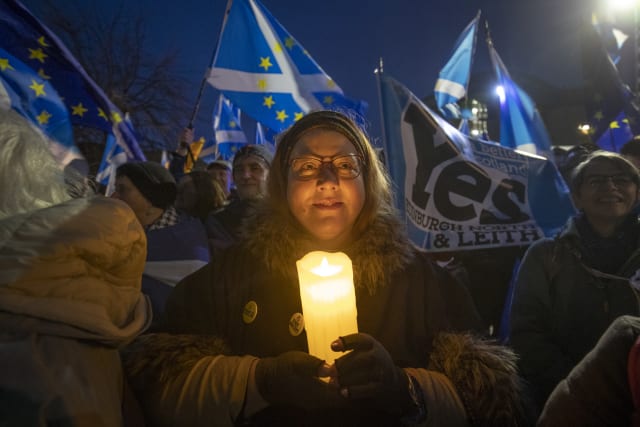 “We don’t want your Brexit” was the message for Boris Johnson at a rally outside the Scottish Parliament marking the UK leaving the EU.

Rallies and candlelit vigils are among events taking place across Scotland on Brexit day.

Leave A Light On gatherings are taking place in Aberdeen, Dundee, Glasgow and Stirling, among other locations, as participants send a message to the EU not to forget Scotland.

In Edinburgh, SNP MP and former MEP Alyn Smith, who used a speech in the European Parliament to urge members to “leave a light on for Scotland”, told the crowd outside Holyrood: “Scotland is a European nation and European we shall remain.”

Addressing the Missing EU Already rally, he added: “I say to Boris Johnson tonight: you’ve already been comprehensively rejected by the people of Scotland.

He added: “Scotland does not consent to what is happening to us now and the UK Government has proven by its actions there is no respect for Scotland at Westminster.”

The rally was organised by the Edinburgh Yes Hub, which backs Scottish independence.

Many of the crowd brought flags which combined the Saltire with EU stars and a choir led renditions of Auld Lang Syne and the Anthem of Europe.

Outside the city, a giant sand art display at Portobello beach read “Scotland Loves Europe”, while two Scottish Government buildings, St Andrew’s House and Victoria Quay, were lit in the colours of the EU flag.

The flag will continue to fly outside buildings, as well as at Scotland House in Brussels, and at Holyrood after MSPs overturned a decision to take it down.

In Glasgow, pro-EU campaigners will gather at the Donald Dewar statue on Buchanan Street ahead of the official departure time of 11pm.

Organisers The Glasgow Loves EU group said: “We will always be Europeans and we are determined to keep our links with Europe strong and are keen to celebrate what unites us.”

Earlier on Friday a well-known city landmark – the Duke of Wellington statue outside the Gallery of Modern Art – had its traditional orange traffic cone replaced by one in the blue and yellow of the EU flag.

In nearby George Square, unionist group A Force For Good plans a Brexit “celebration” from 10.30pm, with attendees urged to “bring your flags and friends”.

First Minister Nicola Sturgeon said in a speech on Friday that the UK’s departure from the EU would be a “moment of profound sadness” for many, and “tinged with anger” for the majority of Scots who did not vote Leave. The day also saw External Affairs Secretary Fiona Hyslop launch a paper covering Scotland’s plans to continue working with the EU over the next five years.

Health Secretary Jane Freeman wrote a letter to each of Scotland’s health boards urging all EU nationals working in Scotland’s NHS to stay.

A group of high-profile figures in Scotland meanwhile put their name to a statement condemning Brexit.