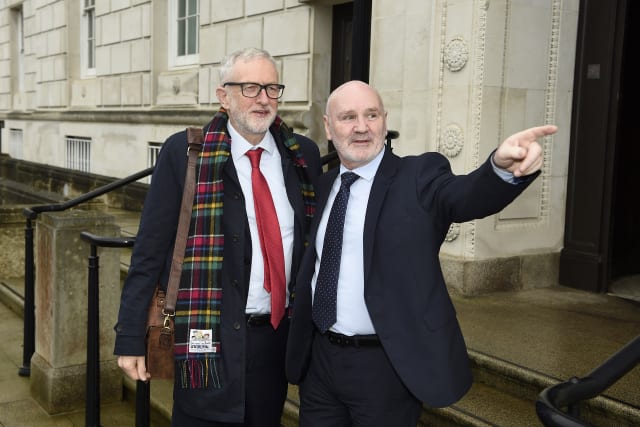 Resolving uncertainty over post-Brexit trading arrangements is a more important priority for Northern Ireland than the debate on Irish unity, Jeremy Corbyn has said.

The outgoing Labour Party leader said it was “difficult to know” whether Brexit had brought unification any closer.

Mr Corbyn met with all the main Stormont parties on Thursday to discuss the UK’s exit from the EU and the recent restoration of powersharing.

He called on Prime Minister Boris Johnson to provide clarity on what Northern Ireland businesses can expect of the future trading relationship, both with Europe and Great Britain.

He branding health inequalities “appalling and disgraceful” and called for a resolution to public sector pay disputes.

Asked if Brexit had brought a united Ireland any closer, Mr Corbyn said: “Very difficult to know on that issue.

“Clearly the issue that is important at the moment is one of dealing with the immediacy of funding and trading arrangements.”

He highlighted that many major companies in the region relied on European trade.

“They need to know they have a future and I think that’s a more important priority than anything else,” he said.

He said Brexit day would bring concern for many.

“It’s going to be a day when many people will no doubt be concerned because it is unclear in the longer term what the process will be for sending goods from Northern Ireland to Britain,” he said.

“The Prime Minister promised in terms that there would be no border down the Irish sea  and then, as we revealed during the general election debate, that it is quite clear there is going to be some kind of tariff arrangement which is being prepared for – now the Prime Minister must clarify this.”

Mr Corbyn met with representatives of the unions Unison and Unite on Wednesday night for an update on their campaigns for pay increases for public sector workers in Northern Ireland.

He said there was a need for major public investment in the region.

“The levels of health inequality in Northern Ireland are appalling and disgraceful,” he added.

“The mental health crisis in Northern Ireland is as bad or worse than anywhere else within the UK.

“You aren’t going to solve those problems just with warm words – that requires public investment.”

Mr Corbyn , who signed a book of condolence for the late former deputy first minister Seamus Mallon, denied his visit represented a stop on a UK “lap of honour” before standing down.

“What I am doing in the period before April when another leader will take over the party is listening to people all over the UK about the election result but also laying the basis for foundations in the party for the future.”